This morning we grabbed breakfast at a patisserie inside our walled medieval city Carcassonne, then called for the porter to pick us up. He had to drive us (and our bags) through the cobblestone lanes, over the drawbridge, outside the walls, and over to where our car was parked (in what used to be the moat). During the ride, he asked where we were from and I said, “Los Angeles.” He lit up and said, “My favorite band is from Los Angeles!!” I started running through possibilities in my mind, but he blurted out, “Toto!”  I shot M a sideways glance but she just stared back blankly, obviously having no clue who Toto is. The driver went on, and on, and on… “Their new album is fantastique! I drove all the way to Barcelona to see them live once. Have you ever run into them in LA?” This was more conversation about Toto than I ever have had, or wanted to have, in my life. FINALLY, we reached the car. He said, “Thanks for visiting Europe’s largest walled city!” Having been to both Lucca and Dubrovnik, I thought about correcting him – but then decided not to bother debating with a guy whose favorite band in the world is Toto.

About half an hour down the road, I was flipping through French radio stations and heard, “I bless the rains down in Africa….” I turned to M and said, “OMG!! It is Toto!”  We both busted out laughing. Maybe it is a French thing? 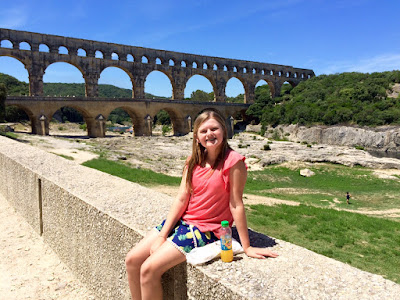 Before long, we reached Pont du Gard, our fourth UNESCO world heritage site of the trip. This 2000-year-old structure is the highest bridge ever built by the Romans. How they stacked giant blocks of stone 16 stories high in  the year 19 BC is beyond me! Each stone weighs 4 to 6 tons! It was constructed with no mortar at all. The arches are made strong only by gravity. 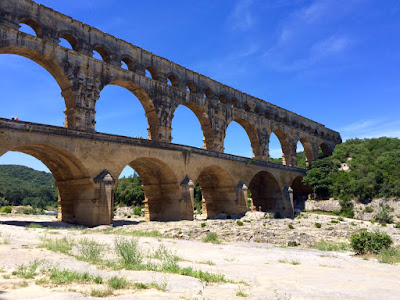 The bridge was actually an aqueduct that carried water for 31 miles from the foothills of the Alps to Nimes. It had to be carefully constructed so that the elevation dropped (water flows downhill on its own), but not too much (it couldn’t become raging) – so they engineered it to decline so gradually that it drops only 4 feet over 31 miles!! 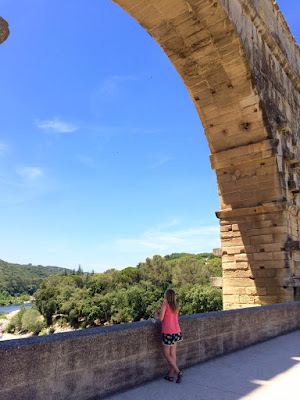 We hiked over the bridge and waved at the kayakers below. It was very hot, so we grabbed some gelato at a stand and headed for Provence, in search of lavender.

Near Gordes, we hit the jackpot. This is the Abbaye de Senanque, occupied by monks. 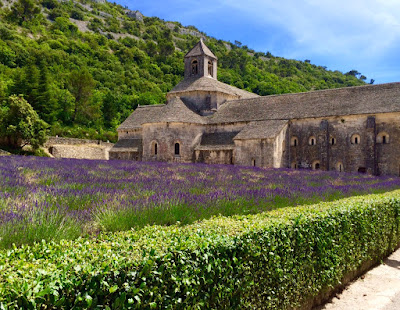 You can wander the property, but have to do so in complete silence. Try that with a chatty 12 year old that has a ton of questions about why monks take a vow of silence! 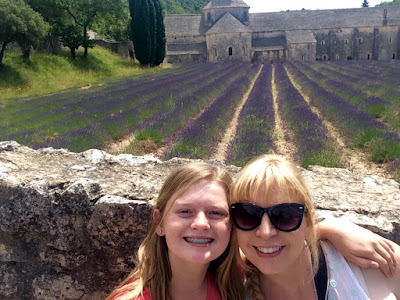 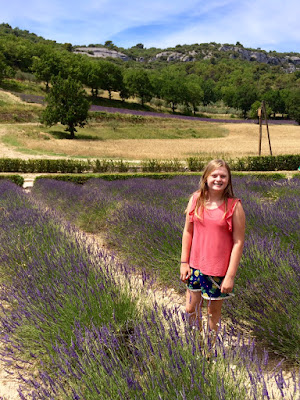 She occupied herself by photographing butterflies. These were 2 of her best shots: 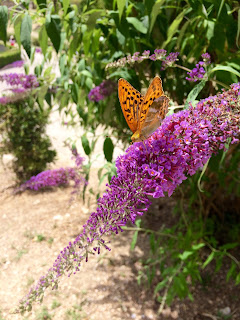 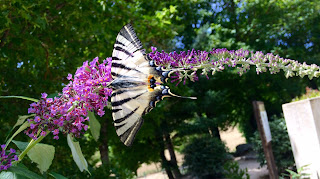 When we got back in the car, she burst. She said, “I would make a terrible monk. But I think you would make a good monk, Mom.” Very observant, dear child. Now be quiet and let mommy drive in silence.

Next on our itinerary was Aix en Provence, but we found it to be a nightmare. Traffic was TERRIBLE. There were people everywhere, and it wasn’t particularly scenic or historic – just large and very crowded. The best thing I saw was the Apple Store. We had intended to do some shopping, but didn’t even get out of the car. This wasn’t the peaceful Provence I was looking for.

Our hotel for the night is in Marseille, which is the second largest city in France. However, it honestly feels smaller than Aix en Provence did. Hotel 96 is an absolute oasis, tucked away in a quiet corner of town. The hotel is ranked #1 out of 127 Marseille hotels on Trip Advisor, and now I understand why. This pool is right outside the door of our room, and an herb garden is located outside the back patio sliding door. 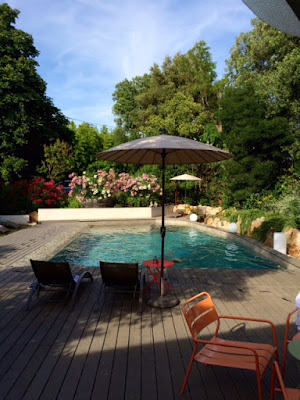 A friendly dog even visited our room to say hello. 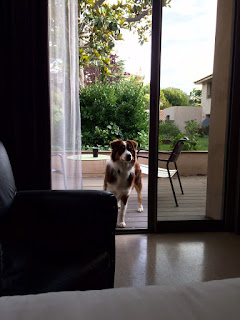 We drove 3km to the beach just to take a quick peek, picked up a pizza for dinner, then retired to the hotel so M could swim and I could blog.


Tomorrow: We do our best Brigitte Bardot imitations as we roam the Riviera.
Posted by Leadfoot at 1:49 PM