It was a day full of giggles from the moment we boarded our Air Tahiti Nui flight. The airline was made for me, with its tropical theme and turquoise amenities. 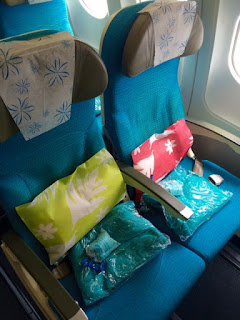 It was all normal until an announcement was made:  “According to French regulation, this plane has to be sprayed. Please feel free to close your eyes and cover your face during this procedure.” We looked at each other like, “What the fudge?” I have flown a lot in my lifetime, and I have never seen THIS: 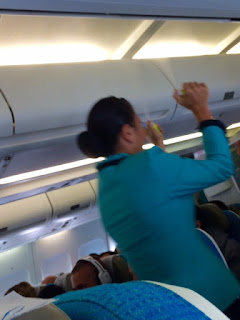 Is this an Ebola thing? Fits of laughter ensued and we re-enacted the aggressive double-handed spraying motion the whole flight.

We watched 4 movies each, ate 2 meals, and voila – we were in Paris.

We picked up our rental car, a VW Golf – automatic, of course. It is appropriately named because it operates just like a golf cart. When you take your foot off the brake, it doesn’t automatically go like cars in America. You have to actually push the accelerator to start forward motion. This caused some initial confusion at a toll booth when I thought the car had stalled. I turned it off and re-started it, much to the chagrin of the line of hurried French behind us.

But we figured it out and were off to Amiens, where we ate lunch in the shadow of the tallest cathedral in France -- The Cathedral Basilica of Our Lady of Amiens. Medieval cathedral builders (between 1220 and 1270) were trying to maximize the internal dimensions in order to reach for the heavens and bring in more light. And it worked, because, mon dieu – it is tall!! It been listed as a UNESCO World Heritage Site since 1981. 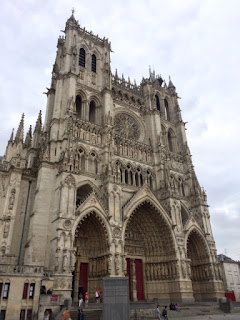 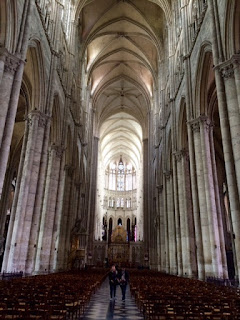 But even more extraordinary than its size, was its artwork. We found this crying angel sculpture from 1625, which perfectly expresses how I feel about my Cleveland sports teams. 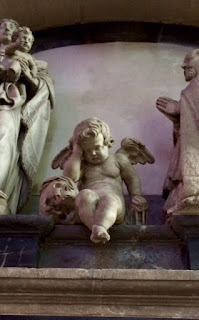 This cathedral also features the most ancient wooden sculptures of any church in Europe. They were amazing and gruesome. Madelyn liked this one of a lady “going crazy” while another lady’s head is being served on a platter in behind her. I liked the one of a headless torso, with the head being held high above it: 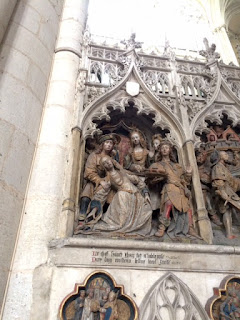 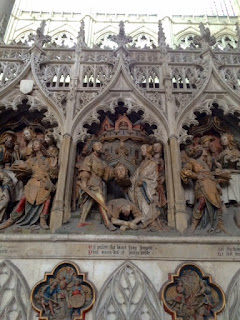 But most moving of all was the story of the medieval stained glass that was mostly destroyed when the US and English forces bombed the church during WWII. Very little remains, and the people of Amiens replaced what was lost with clear glass so that the destruction would forever be obvious. M asked me, “why would we bomb churches?” I didn’t have an answer for that. My guess is that maybe that’s where the Germans hid, hoping we would spare bombing such a treasure. At any rate, it was heartbreaking. 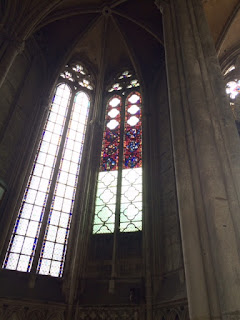 We picked up some macarons at the famous Jean Trogneux and hit the road for Rouen.

We found our hotel without issue, but while following directions to the parking courtyard, we ran into a little legal trouble. The hotel owner told us to go around the block and use the bus lane “just for 50 meters” to get to the gate. So we did that, and were promptly pulled over by 2 French motorcycle officers.  They started rapidly telling me what I did wrong in French. And in my best L.A. blonde accent, I said, “I don’t speak French.” They literally laughed, said, “d’accord” and drove away.

By now we were exhausted, after being awake for 36 hours straight. But I wanted to stay out until at least 7pm so that we wouldn’t fall asleep too early and wake up at an ungodly hour. So we walked around Rouen taking in its amazing medieval sights and half-timbered buildings. 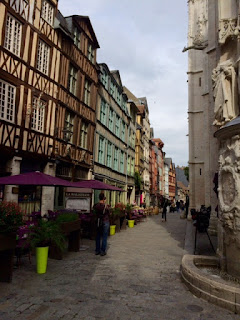 First, we stumbled upon the Gros Horloge (“Big Clock”), built in 1528. It only has an hour hand, because in the 1500s, knowing what hour it was offered sufficient knowledge. Minute hands only became important in a later, faster paced age. 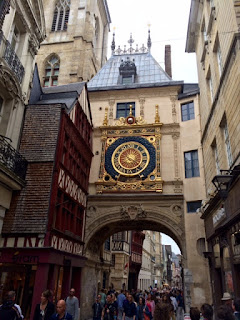 Next we found the Place Du Vieux Marche, the square where 19-year-old Joan of Arc was burned in 1431. The spot of her death (and later, 800 executions via guillotine) is marked by a large aluminum cross. 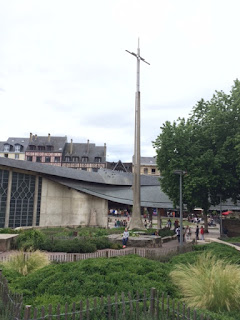 Rouen’s Notre Dame Cathedral, built in 1035, was made famous in a series of paintings by Monet.  But again, we found its recent history more fascinating. During World War II, the cathedral was bombed by the British. Seven bombs fell on the building, destroying its two rose windows. One of the bombs did not explode. A second bombing by the US Army Air Force burned the oldest tower. During the fire the bells melted, leaving molten remains on the floor.  The church also has an amazing carved stone stairwell. 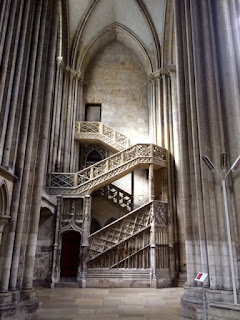 On our way back to the hotel, we passed by the Palace of Justice, home of Normandy’s parliament.  These pockmarks on the side of the building are left over from the bombings during the Normandy invasion. 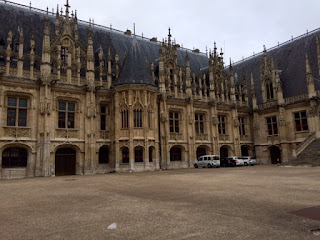 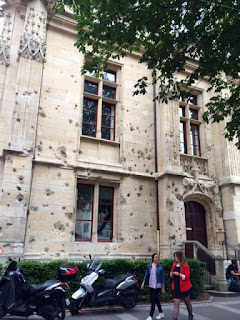 Takeaway of the day: Wow, the US really did a lot of damage to France during WWII. It must have been terrifying to be living here during that time.

We grabbed a few crepes for dinner and called it a night. 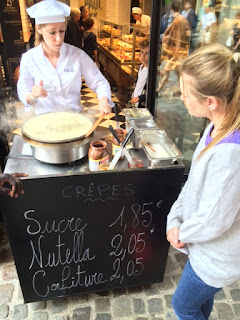