We woke up in Colmar and grabbed bagels for a change, since we were near Germany. Then we spent the entire day driving the Route des Vins in Alsace, between Colmar and Strasbourg. It’s only about 80km, but we took our time, stopping in all the little villages along the way. The drive is lined with hills and green vineyards and is GORGEOUS! 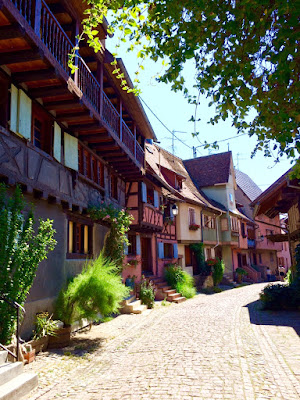 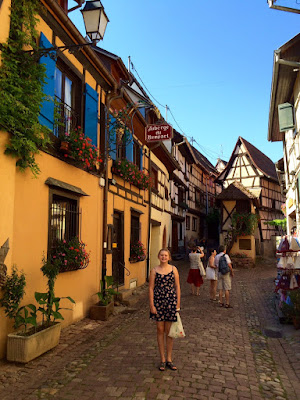 First stop was Eguisheim, which we decided at the end of the day was our favorite. Most of the homes here were built in the 1500s, are candy-colored, and adorned with flowers. It was positively amazing.  I told M to close her eyes and imagine living here 500 years ago. She said, “great, I would have to run across town to see if my friend wanted to hang out, and would probably break my ankle on the cobblestones, then die because of primitive medical care.” Geez! Thank goodness she lives in the time of iPhones! 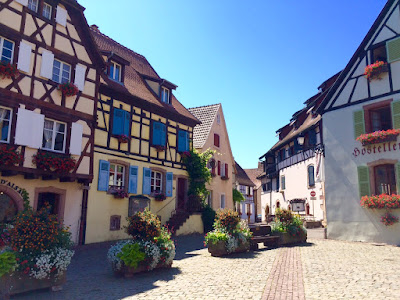 The best part about Eguisheim was the storks! The stork is the symbol of the Alsace region, and lots of stork products are sold in every gift shop. But we didn’t ever expect to see live storks! We saw a ton of them! They nest on top of the church! We watched them take off, circle and land. It was very cool. Here are 3 real storks with the present they brought me last time a stork visited me: 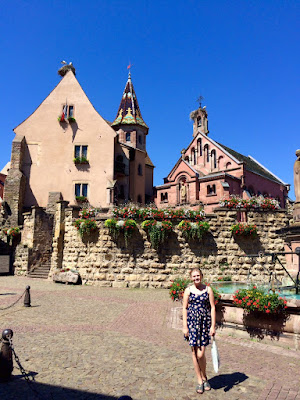 We drove through Turckheim, Kintzheim, and Ribeauville – not a lot to see. They area all very picturesque, but also all start to look the same after a while. 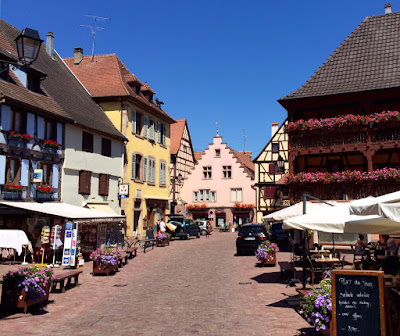 We stopped for lunch in Riquewihr, France’s “most visited town.” This town is unique because the hill with all the grape vines comes right up to the edge of town. So as you walk through town, you can see the vineyard looming overhead. It is a very cool effect. 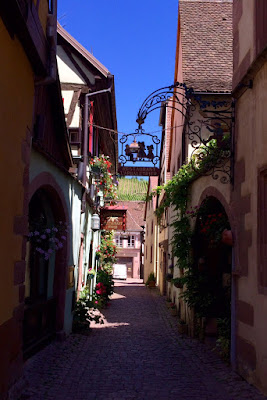 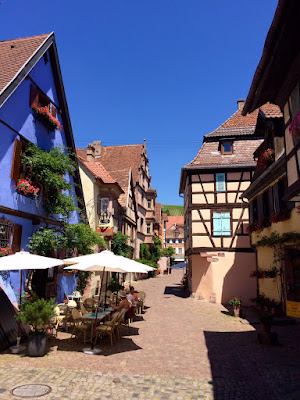 I felt bad about skipping out on German food in Colmar, so I told M we were going to have an authentic, local lunch. We sat at a restaurant and I ordered quiche. M ordered meatballs with mustard sauce and spaetzle (which were very good). When it showed up, my quiche smelled SOOOO bad. It was as if someone had taken really stinky feet, threw up on them, and then walked into an outhouse. It was AWFUL. I tried to take a bite, and gagged. I couldn’t even get one bite down. I told M, “I don’t want to insult the locals, who must think this quiche is perfectly normal and delicious. So we need a plan to get rid of it.”  I waited until nobody was looking, put the entire slice onto a napkin, wrapped it up, and slid it into my purse.

I thought this was a genius plan, until it was time to pay. I unzipped my purse and a wall of odor nearly knocked me off my chair. I looked at M with the most disgusted look on my face and we both burst out laughing. I was half laughing-half crying through the entire credit card transaction with the server. He had no idea why, but must have thought we were nuts.

Now our only mission was to get that rotten quiche out of my purse. We found a trash can on the town square and I retrieved the napkin bundle and tossed it. Out of curiosity, I smelled my hand. Huge mistake. I almost vomited. My hands reeked with evidence! About that time, M realized her phone was in my purse. She made me get it out, so that she didn’t get smelly hands, and sniffed it. She was furious, but also trying not to pass out – because it shared the same horrible odor.

We wiped everything off when we got back to the car, and now, hours later, I think the smell is finally out of my purse, but I refuse to actually check. 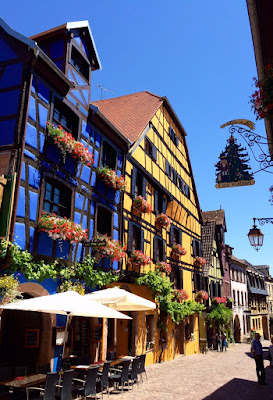 By the way, I grabbed a German pretzel as a replacement lunch. It was delicious.

We stopped for ice cream in Obernai, the largest town on the Route de Vins, did some souvenir shopping, then headed to our hotel in Strasbourg.

Strasbourg also has a canal area, similar to Colmar and Alsace, but on a much larger scale. 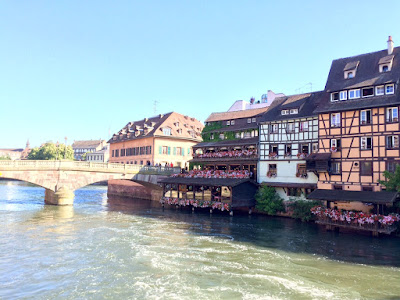 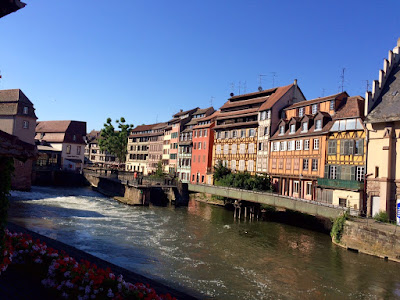 We wandered around that for a while, then walked to the Strasbourg Cathedral, built in the 1200s-1300s. It was closed, but was beautiful to look at from the outside. 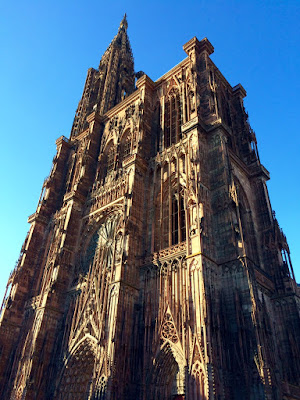 By now, we were exhausted (mostly from laughing), so we grabbed a quick bite next to the canal, and headed back to the hotel.