France Day 2: Stuck in the Mud 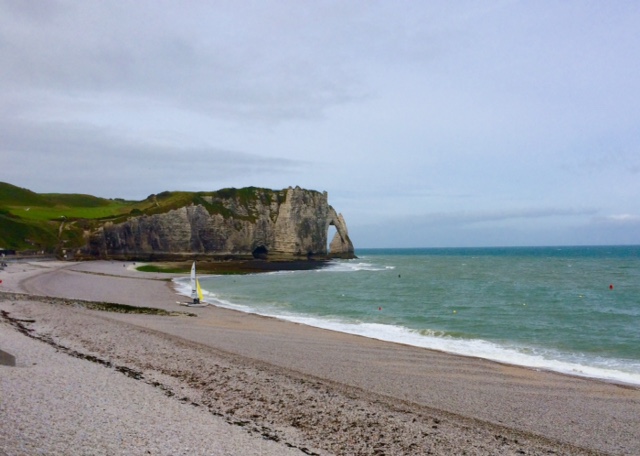 Madelyn woke up at 4:30 am this morning. I followed at 6am – bright eyed and ready to go. We put our hair in French braids (obviously!), grabbed a baguette, some camembert, a few croissants, some café au lait, and hit the road.

First stop, Etretat.  We wanted to see the famous white chalk cliffs and arches.  But it was FREEZING. Drizzling and really cold. So we did the fastest photo shoot ever, and ran back through the town to the car. 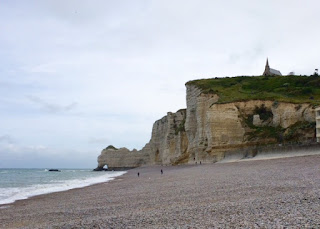 We jumped into the car, put it in reverse, and it wouldn’t move. The engine revved, but it was as if the transmission were in neutral. I thought maybe it was stuck on something, so we got out, looked under the car – nope – nothing. I got back in, and tried again. Totally stuck. I ran over to a meter reader, who was writing people parking tickets, and asked in broken French if he could help me.  He tried – and had same problem, and still no clue as to why. By now we had gathered a small crowd.  Someone said, “Avez-vous verifie le frein de main?” I answered, “I didn’t PUT ON the parking brake, so no need to check it!” (Gee, I must have accidentally learned French since yesterday when I told those cops I didn’t know any.)  Sure enough, I looked down, and the freaking parking brake was on.  Thanks a lot, Volkswagon. Now the town of Etretat will forever talk of that dumb blonde who couldn’t back up. In my defense, the parking brake didn’t put itself on yesterday! But did a few more times today. At least now we know.

Next we drove to Honfleur to see it’s beautiful Vieux Bassin (old harbor) and eat lunch. To get there, we had to drive over the Pont de Normandie, the longest cable stayed bridge in the world. Lovely, since I do not like bridges. M laughed as I white knuckled it the whole way. 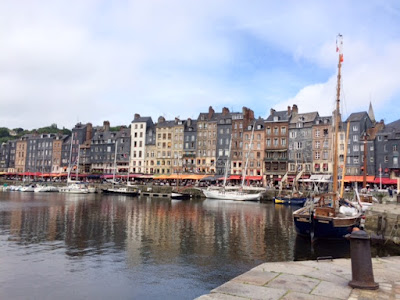 Those skinny houses in Honfleur were built at a time when buildings were taxed based on their width, not height. Pretty crafty! We ate at a café underneath a skinny house, as by now the sun was out and it had warmed up significantly.

My original itinerary had us going straight from Honfleur to Mont Saint Michel, but on a whim, we decided to check out the D-Day beaches at Normandy since they were nearby and M had enjoyed all that WWII history yesterday. 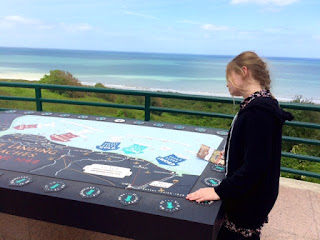 We were so glad we made that choice. It was the highlight of our day. We went to Omaha beach, where there is a small museum that explains D-Day with photos and films. Then we walked through the cemetery, overlooking the beach where those brave souls came ashore.  More than 9,000 American soldiers are buried there. NINE THOUSAND. It was a very shocking and emotional experience. 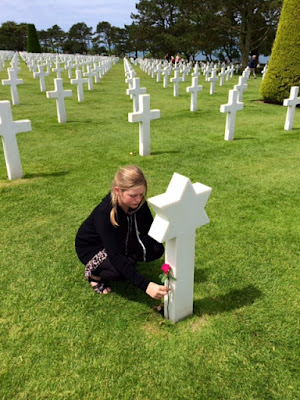 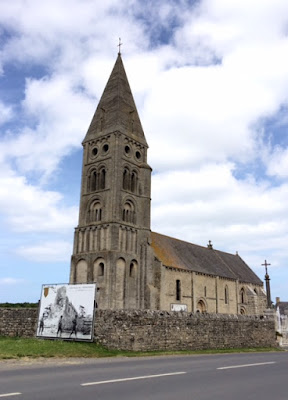 Driving towards Mont Saint Michel, I thought a lot about both of my grandfathers, and told M stories of them from the war. Suddenly, I stopped mid sentence because we saw it from 7km away – Mont Saint Michel. I was so excited. I had wanted to see the Mont ever since I was Madelyn’s age and learned about it from my French pen pal Christelle. 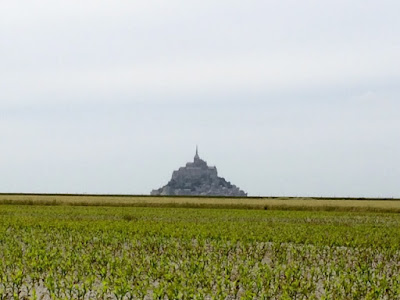 We parked across the causeway, took the shuttle over, and dragged our luggage up the mountain, through cobblestone streets. M has asked me to note that, “it was terrible.”  However, there are only a handful of hotel rooms on Mont Saint Michel, so few people get to sleep on the island. It may have been terrible getting here (it was), but it was so worth it. Our hotel, Hotel Le Mouton Blanc, was ancient and perfect. 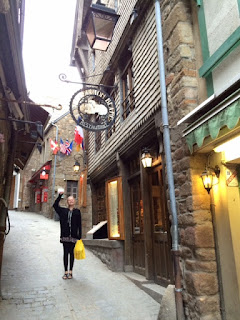 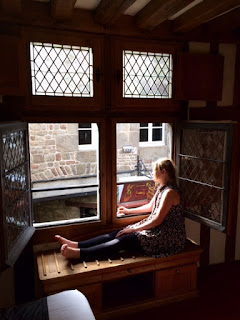 The island was developed in the 700s (!!) when the monastery was first built because the Archangel Michael appeared to Saint Aubert, and told him to build a church on the rocky island. Since then, pilgrims have come to this holy site to worship by walking from the mainland across the sand at low tide.  The tides come in very quickly here – sometimes a meter a minute. The water can rise 14 meters in just one tide cycle. So the crossing was often deadly. That didn’t stop people from trying it today though. And thank goodness for those people, because it was the funniest thing we saw all day. Every single person we watched as we walked the ramparts waltzed right out, and then promptly sunk and became stuck. M thought this was beyond hilarious, as you can see in this video we took:

We climbed up to the abbey on top of the Mont, which had to have been a few million stairs. I kept stopping and told M I had to stop to take "artsy photos"such as this one below. Really it was so I would't die. 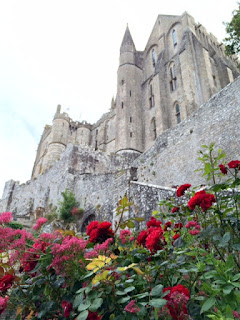 We had dinner, which I partnered with a large bowl of cider – the local alcohol specialty. We had some caramel cookies with a silhouette of Mont Saint Michel pressed into them for dessert, then called it a night.


Tomorrow: More Brittany and our first Chateau.
Posted by Leadfoot at 2:52 PM