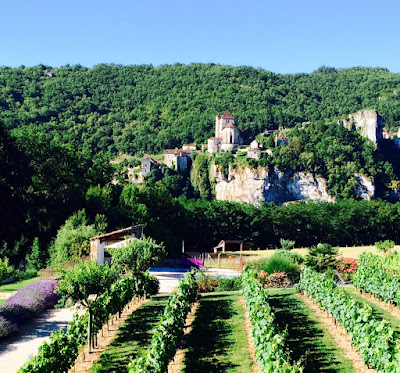 We woke up in Hotel Le Saint Cirq and threw open the windows to look out onto the vineyard and lavender patch below.  We had explored Saint Cirq Lapopie last night, and had dinner in town, but it was late, and dark. This morning we ventured back and found an eye-popping town. 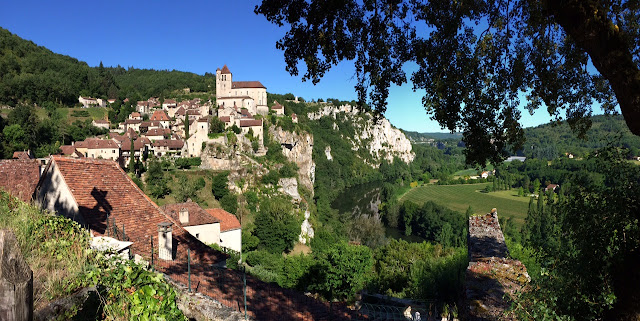 No wonder it was named the most beautiful village in France. It is clinging to the side of a cliff, and hanging above the Lot River. The tiny cobblestone lanes (no cars are allowed) are murder on the legs, as they go straight up and down. People who live there must have buns of steel! 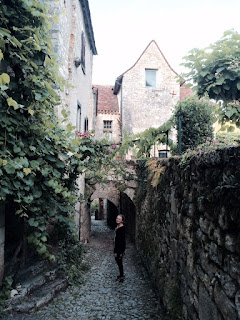 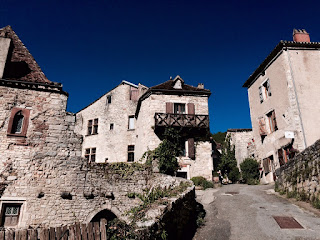 We even found a Saint Cirq Lapuppy. (Tee hee!) 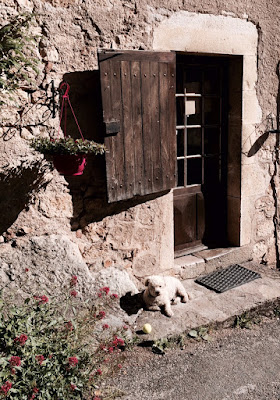 We gobbled down an almond croissant and an apple fritter, along with fresh orange juice and café au lait, while overlooking the spectacular view below. (I feel “meh” about coffee back home. But in France, I LOVE coffee. It is so much better here!) 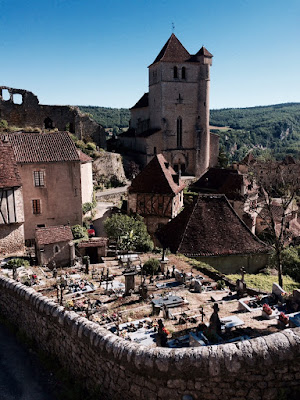 After seeing how dark the water was in the Lot River, we decided against canoeing, so it was back into the car and on to Albi. We planned to stop there only because I had read the cathedral had a turquoise ceiling. And I will stop to see anything turquoise. But Albi turned out to be our favorite city so far! It is a medium sized bustling city, but has a very unique look and an artsy feel – different from anything I have seen before in France (or Italy!). Because there is no stone quarry nearby, the entire town is built with red brick. We scrapped our plans to visit Conques, and spent a few hours walking around Albi and eating lunch. 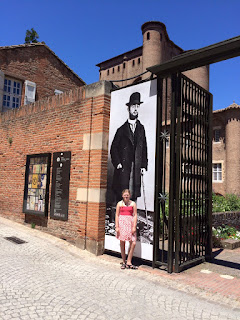 M outside the Toulouse Lautrec museum in Albi

The cathedral, Saint Cecile, is THE best cathedral I have seen in France, hands down. Better than Notre Dame and Saint Chapel in Paris, and anything we have seen so far on this trip. My mind was blown. It was built in 1265, entirely out of brick, and is MASSIVE. Here is M standing next to it, for scale: 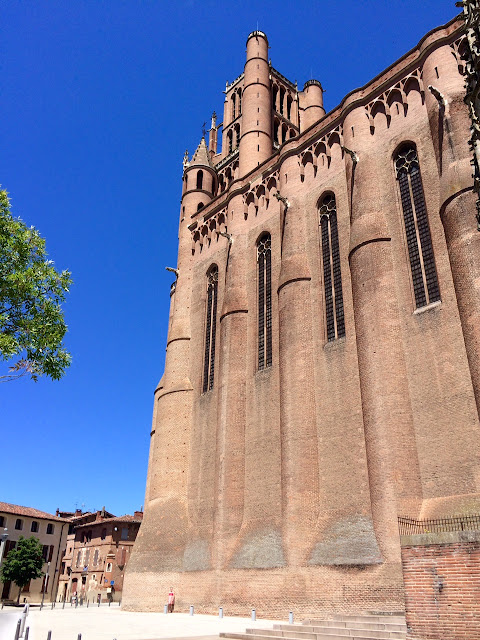 Brick, you guys. Someone had to lay each and every one of those bricks!! 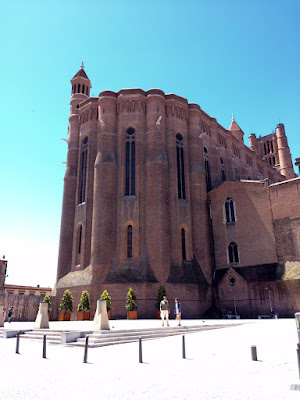 It was built right after the crusades to remind people that the church was powerful, and to be respected. I don’t do religion, but I totally understand how people walked into these places hundreds of years ago and instantly believed every word they were told. The giant scale dwarfs you, the décor overwhelms you, and for a moment you think, there’s no way anybody would go to this much trouble if their message isn’t 100% accurate. But I ESPECIALLY had that feeling at Saint Cecile. It was breathtaking.

Every single square inch of the interior was covered with colorful patterns. The giant Last Judgment painting is from 1474. 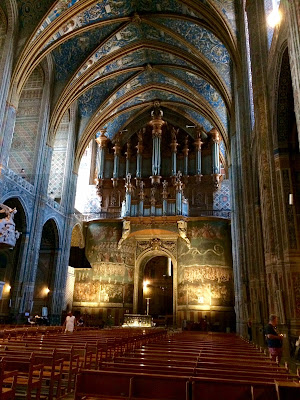 And the ceiling – WOW. I am afraid my photos don’t do it justice. It is covered in Fresco paintings that have not been touched or restored in 500 years. It is brilliant and stunning. 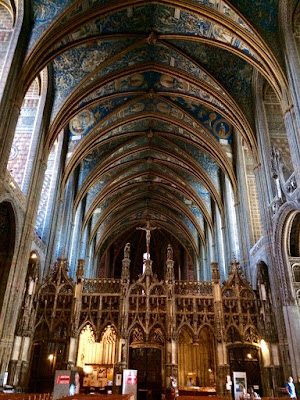 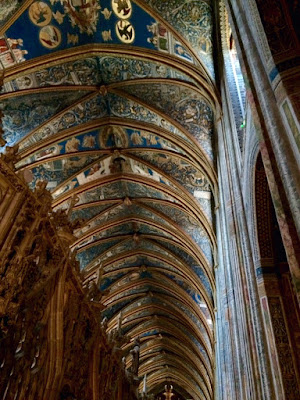 Honestly, I didn’t want to leave.

But we had to drive 2 hours to Carcassonne, so we hit the road. We have been listening to French Radio for 5 days now, including a lot of French rap and Euro pop – but today, we had a special visitor come over the airwaves. Yes, they played Adam Levine, singing Sugar. It instantly made us feel really sweet inside (that was M’s line).

Carcassonne is something out of a fairy tale. 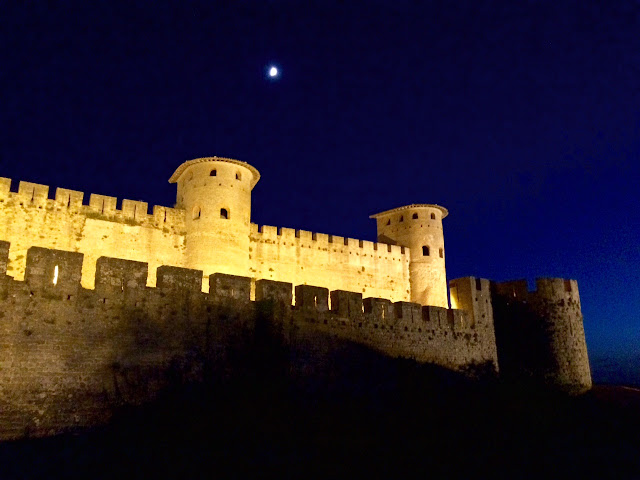 It is a perfectly restored medieval town and UNESCO heritage site, full of turrets, cobblestones, a cathedral and a castle. The whole thing is surrounded by 2 sets of walls, originally built by the Romans in the 2nd century BC. If my math is right, that is 2200 years ago!  Its heyday was in the 1100s, when most of the structures inside the walls were built, and the walls were made much taller.

M and I took the 2-mile walk around the outside of the town, between the 2 walls, to try to capture Carcassonne’s magic in photos. 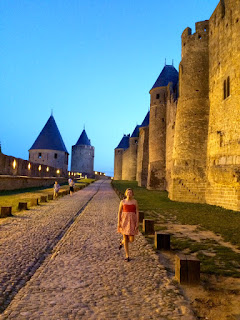 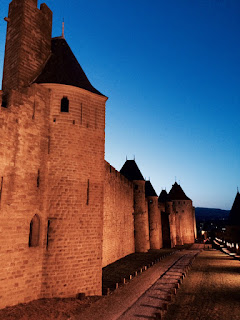 Then we walked back around, outside the exterior wall to get more photos!  Exhausted, we crossed the drawbridge and returned to our room – INSIDE the walls (most people stay outside, in the new village below, but when you book 6 months in advance, you can get one of the few rooms inside the town!) 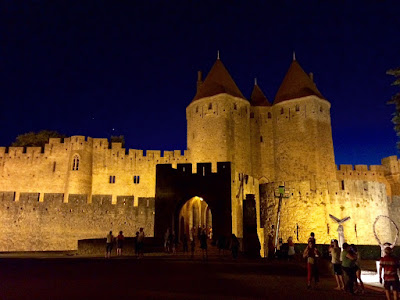 Now do you understand why our legs hurt? Bon soir!