Spain Day Two: Gaudy, But We Love It! 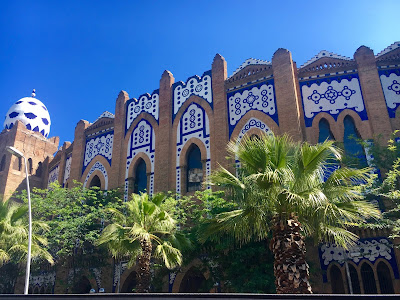 We started the day by grabbing pastries and coffee from the bakery directly next door to our hotel, then catching the Hop On Hop Off bus. This open-top bus costs 28 euros for 24 hours and is the most convenient way to see a lot of Barcelona on a tight schedule. It also comes with a pretty decent audio tour, in English. We rode on the top deck and saw the old harbor, beaches, Olympic Village, a bullfighting ring, the famous Barcelona building I call “the bullet,” a modernist hospital, a Frank Gehry-designed hotel and sculpture, and a lot more. 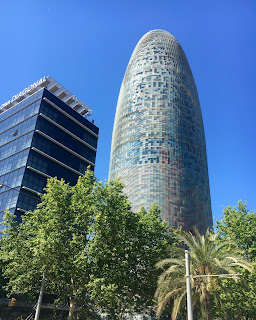 Our destination was Park Guell, on the far edge of town. We got off the bus and walked 15 minutes to the park ticket office, only to learn that the next available tickets were for 6pm. It was noon. We hiked back, got back on the bus, and went to the other Gaudi building we wanted to see – La Padrera. 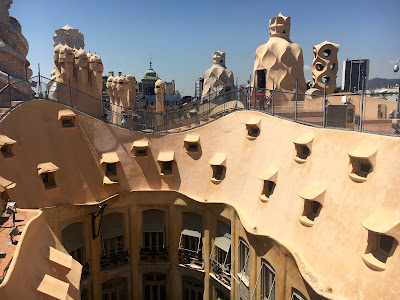 La Padrera is an amazing apartment building that looks like melting ice cream – all curvy shapes and soft edges. Gaudi said that rooftops should be beautiful too – not just functional. So we began our tour on the roof, where he designed a series of sculptural chimneys, stairwell exits and antennae covers. Adam said they looked like storm troopers. The ones topped with broken champagne bottles are obviously based on a certain male body part. Gaudi did base all his designs on nature! 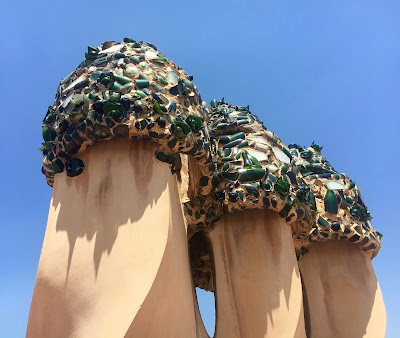 The arches on the rooftop were built to frame Gaudi’s masterpiece, the Sagrada Familia. 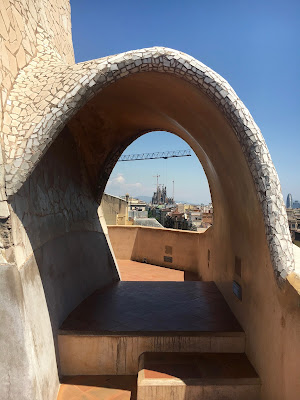 We descended the stairs and entered an actual apartment. It was huge! Way bigger than I expected. It encircled the center courtyard and took up an entire floor, so it had natural light from both sides. People still live on other floors in the building. Can you even imagine living in a Gaudi building? I mean, the guy has a commonly used word (gaudy) based entirely on his name and design style. How cool! 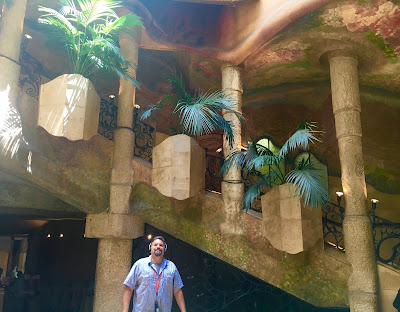 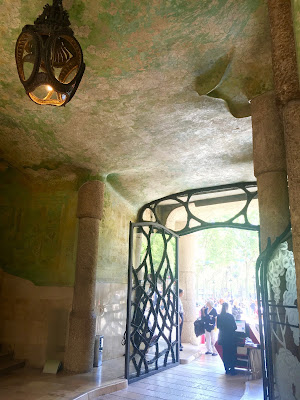 Next we stopped for tapas along the Passeig de Gracia, and I ordered pasta because I was tapas-ed out.  We walked to the Placa de Catalunya, the huge square in the center of the city, and sat for a bit to watch pigeons and people taking selfies. Then we strolled down Ramblas, which was incredibly crowded, so we dipped into the Gothic Quarter and found a quiet square on which to enjoy some gelato. 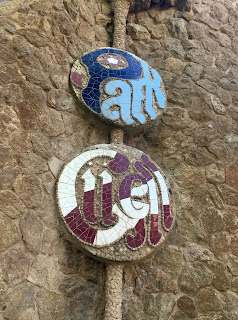 After strolling and shopping a bit, we grabbed a cab back to Park Guell for our 6pm ticket time. Park Guell is a Gaudi-designed housing development that was started, but never finished. It is basically the grounds that were going to have houses built on site, but the houses never followed. Everything in the park is covered with broken tiles. We saw the salamander, which is the symbol of the city, and the serpent shaped bench that winds for hundreds of meters around a huge vaulted space that overlooks all of Barcelona. 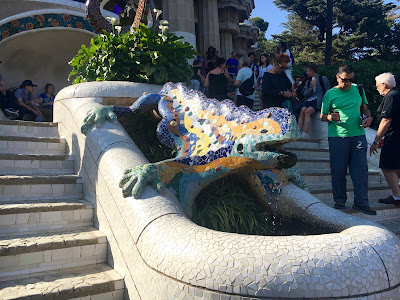 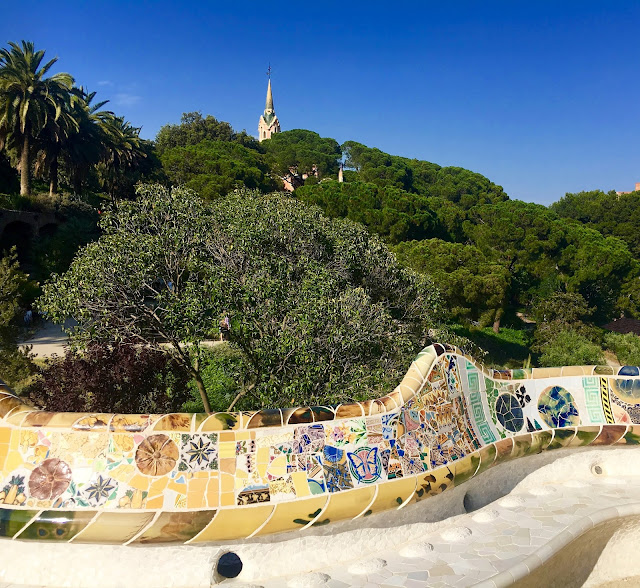 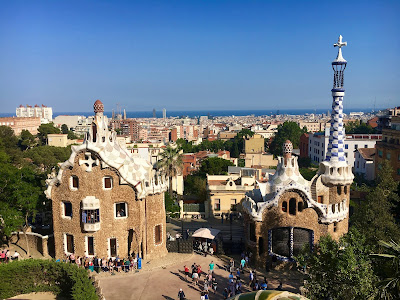 The grounds also feature a grotto built entirely of stone, part of which Gaudi designed to look like you are inside the barrel of a wave. Overall, Park Guell was well worth the extra effort and cost it took to get there. We agreed we were glad we had gone. 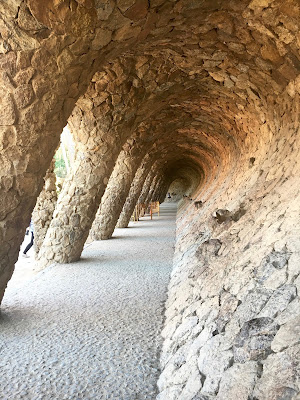 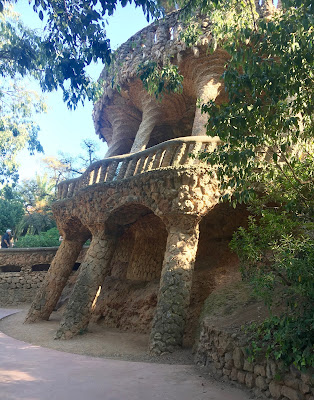 We headed back to the hotel and vowed to hold out until 9pm to eat dinner, as that is when the restaurants start to fill up. It was still light outside when we left the hotel at 9:30. WTF Spain? We are used to darkness falling at 8:30, not 10pm. It was weird! No wonder people eat so late! 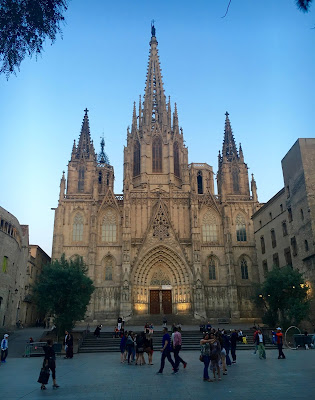 Strolling past the cathedral, just as people have done for 800 years 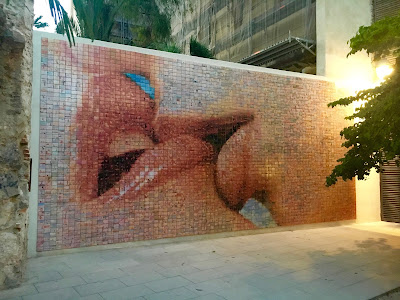 Cool street art, made up of thousands of tiny photos

We had dinner at 10pm at a place called Taller de Tapas, which was also very good. I had white sangria instead of red this time. We had salads, bread, cheese, meat that was cooked in a pot with chilis and garlic – it all was delicious!

Back at the hotel, we went to the rooftop one last time and said goodnight to Barcelona. 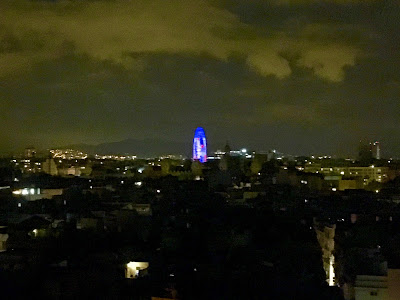 "the bullet" in the distance

xoxo
Posted by Leadfoot at 1:49 PM