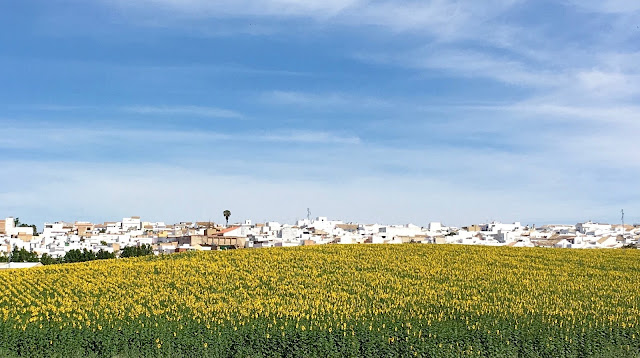 We had originally planned to spend today seeing the rock of Gibraltar and then ferrying across to Tangiers, Morocco, so we could say we had put our feet on African soil. However, neither of us were feeling it. Adam had been told that Americans have been kidnapped there recently because American passports are worth about $60,000 a piece. I just didn’t feel like driving 4 hours round trip to see a giant rock covered with monkeys that steal your sunglasses. We agreed that adding a hill town and more time in Seville sounded more appealing. 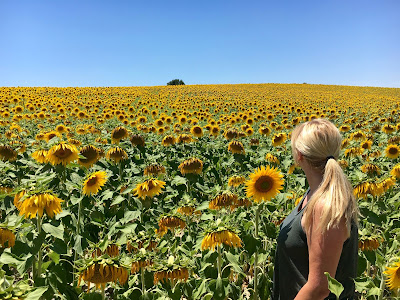 We hit the road, and because Adam is the best BF ever, he suggested we turn off Spanish radio and put on Taylor Swift. This was both because he felt bad he had canceled Africa, and because I had watched the Cavs lose from 2am-5am and I was tired and depressed. But like T Swift, I was able to Shake It Off once I saw the beautiful countryside that spilled out between Ronda and Seville. There were sunflowers EVERYWHERE. Way more than I have ever seen in Provence or Tuscany. We were on small back roads, so we could easily stop to take photos. Which we did three times! 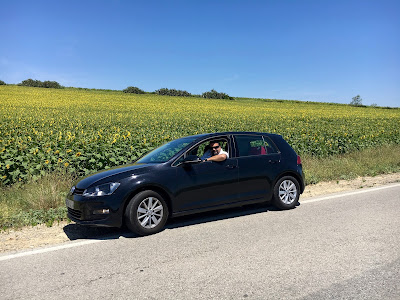 We went to Arcos de la Frontera, which is a cute little white town with an old center on the tip top of a very high hill. We parked in the central garage and then took the minibus to the top with the locals. It was CRAZY! The streets were insanely narrow and twisty, yet somehow the driver navigated them with just a quarter of an inch to spare. The local women on the bus laughed at us as we gasped, winced and made wide eyes at each other with every turn.

We did Rick Steves’ walk of the town, making our way to the viewpoint. But instead of the amazing view, I was drawn to the birds of prey at the the end of overlook. They were available for people to hold (we didn’t) for photos. Adam couldn't resist petting them, despite my protests about bird flu. 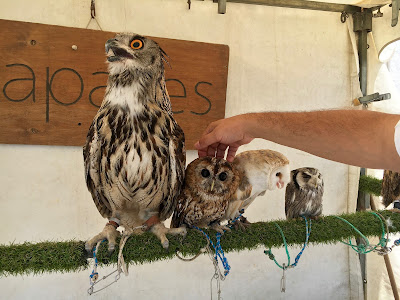 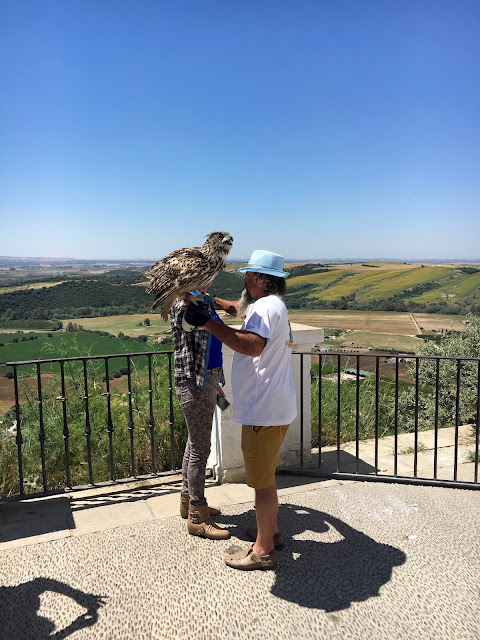 Then we found the convent with the cloistered nuns, which has been there since 1642. Nobody is allowed to see these nuns, but they make money by selling cookies through a little lazy Susan device in the wall. It was weird, but awesome to think about the fact that nobody has seen these women’s faces since they entered the convent in their late teens. 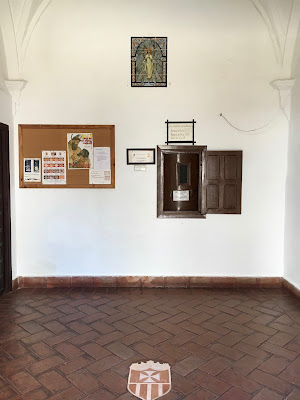 That's the cookie menu on the left and the rotating window on the right.

Next, it was off for another long drive through sunflower fields to Seville. When you picture Spain in your head, Seville is what you are seeing. Flamenco dancers, lacy fans, Spanish tiles everywhere… that is Seville. It is similar to Granada, in that it was settled by the Moors nearly 1000 years ago. But it is much larger than Granada, and thankfully, also much flatter. 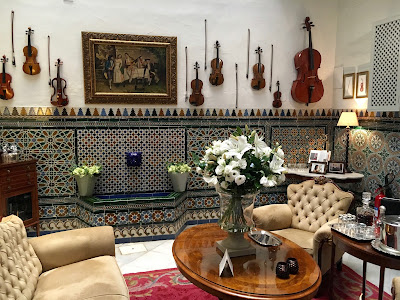 Lobby of Hotel Amadeus, which is deceivingly cute. Avoid at all costs.

Our hotel, the Hotel Amadeus, was in the winding back alleys of the barrio, where all the main action was in town. Action, but no parking. We had to park in a lot about half a mile away and drag our luggage over cobblestones. This was getting old fast. We went into our room, expecting to see the suite with a bathtub I had booked. My reservation confirmation specifically said “room with a view and a bathtub” – it had neither. Instead, we had a shoebox of a room that barely fit the bed and a window that looked at a white wall. The pink monster couldn’t even lay down anywhere in the room. We decided we would just roll with it. We were sweaty and wanting showers, with no energy to switch rooms. I went first, and discovered there were no towels. Not one. (It only got worse from there. Later that night, we would wake up to a stifling, awful smell. Like so bad that it woke us both up. Adam tried to blame my sandals, but we finally sniffed out that it was the pillows. When they warmed up, the feathers smelled like death. And to top it off – the wifi was TERRIBLE. I couldn’t even upload blog photos. Thank goodness there wouldn't be an NBA Finals game while we were there. The moral of this story is…if you are ever in Seville, do NOT stay at the Hotel Amadeus.) 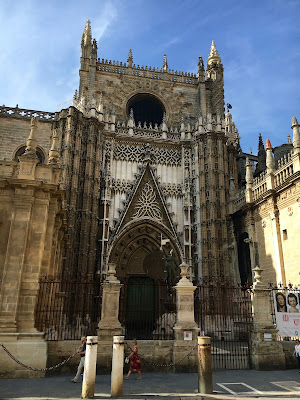 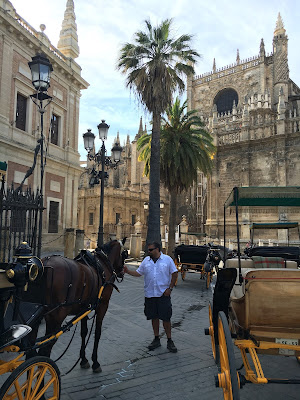 We left the hotel around 5pm and followed Rick’s suggested walk again. We saw a million adorable squares and cobbled lanes. We had a dinner of paella, gazpacho, grilled chicken and on a cute square filled with orange trees. I was happy it wasn’t tapas again, as I wanted to tapa out from Spanish food a long time ago. Adam ordered fruit for dessert and the waiter brought him one whole red apple and a knife. HA! Oh, Spain. 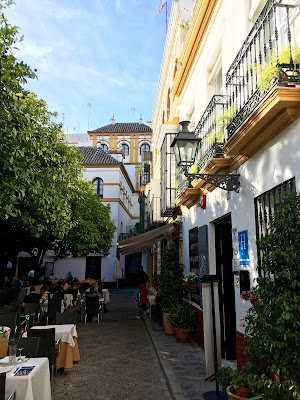 Next would be gelato at Bolas, an artisanal ice cream maker (YUMMY!), and then it was off to our room. My bangs were driving me crazy, so Adam trimmed them with his beard clippers. I was nervous, but bad bangs are better than bangs hanging into my eyes. So I dubbed him the new Barber of Seville, and went to bed with my fresh bangs that were actually just perfect.

xoxo
Posted by Leadfoot at 1:41 PM