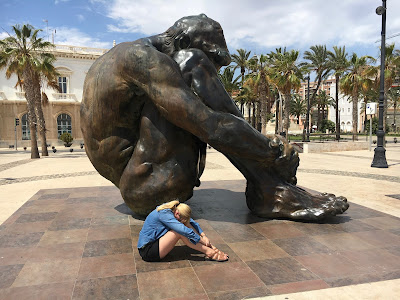 Today we would drive to Cartegena, which was 3 hours south of Valencia, and 3 hours north of our next stop, Grenada. Adam went out to get croissants and coffee while I got ready. I stood outside with the luggage while he fetched the car, then we were off!

The amazing gas station/rest stops have signs with symbols that tell you what can be found at each one. Along the way, we laughed as we saw signs for freeway rest stops that offered swimming, pottery, wine, gifts, and much more.

This part of Spain was very dry. I was surprised. I’m not sure what I expected, but it reminded me of the drive from LA to Bakersfield – not much to see except rocks and dirt. We stopped for fuel and ran into another Runball Rally team in an Audi. I asked where they were going. They told me they had started in Germany, went through France, Italy, Monaco, and would end in Marbella, Spain. What a cool event!

At the gas station, I bought a European Kit Kat so Adam could see how different they taste. He agreed – they are so much better here than back home! Creamier chocolate and better flavor! 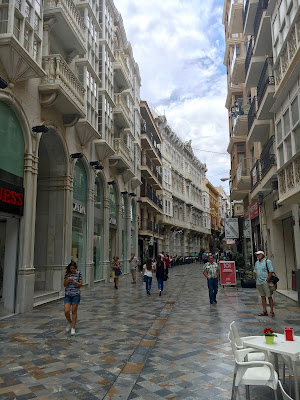 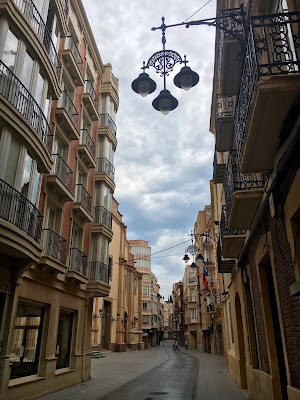 We pulled into Cartegena and were instantly disappointed. It was very small, and we couldn’t see much charm from the road. It was located on the waterfront, but there wasn’t a beach, just an industrial looking port. We checked into the HN hotel (our room had a terrace, but it didn't overlook anything good) and walked to find lunch. The town was empty. The streets were dead! Not a fellow tourist in sight. We also noticed that we hadn’t yet seen one cat in all of Spain. They were all over Greece and Italy. Where where the Spanish cats?! 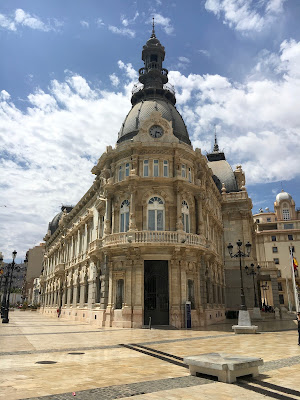 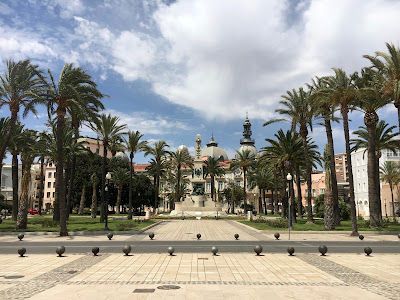 We had more tapas – ham croquettes, sandwiches, etc. They weren’t great and I was feeling let down by Cartagena and like I had failed at trip planning. I dubbed the town Cartege-NAH. We headed for the waterfront to look at the public art displays we saw on our way in. 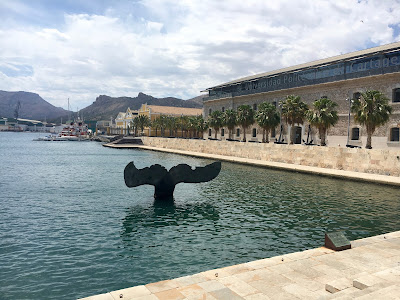 We rounded the bend and saw this HUGE mega-yacht, the Katara, which apparently belongs to the Emir of Quatar, who is worth $10 billion. He gave the throne to his son, who is only 36, so he could sail the world in his 408 feet long, $300 million yacht. Wow! (And thanks, Google!) 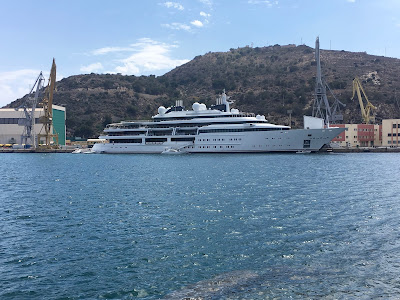 I was still meh about the town, when Adam spotted a tourist catamaran named Ole, and ran to ask if we could board. For $8, they would take us on a one hour ride out of the harbor, into the Mediterranean, and over to look at a small beach. SOLD!  I love being on the water, so my mood immediately improved. I laid on the net on the front of the catamaran and watched the teal sea go by underneath me. It was heavenly. 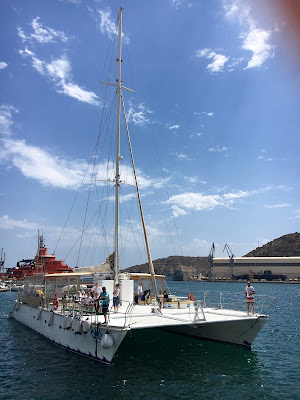 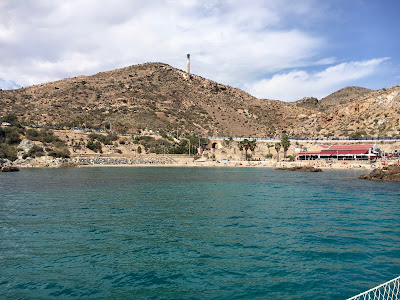 Back on land, we walked to buy pastries for the morning, then decided to try to find an early dinner (it was only 7:00 – would any kitchens even be open?!). We walked back down the same main street we had walked to find lunch earlier – but this time it was totally different. It was full of life! It was as if every family in town was out, strolling the streets. There were old couples walking arm in arm. Teens roller blading and playing soccer. Young couples holding hands and kissing on benches. Kids riding the carousel. It was filled with music and laughter. We stopped for an orange juice (me) and a beer (Adam) and watched Spain go by. We had been dropped right in the middle of authentic Spain – and it was really sweet and fun to watch. 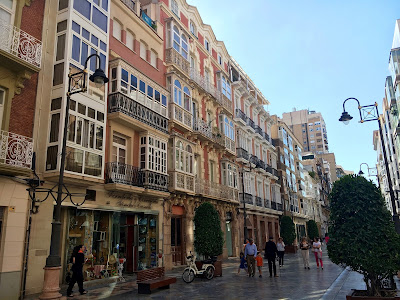 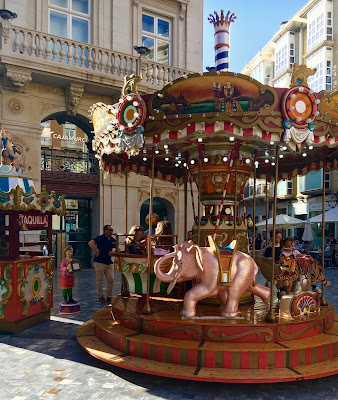 We found a pizza-by-the-slice shop and grabbed 2 slices. Then we passed a waffle shop. They smelled amazing. I hesitated, but Adam told me I was on vacation, could have a waffle, and he would share it with me. We had the banana caramel waffle and it was to die for! It wasn’t light and airy like a Belgian waffle. It was dense, chewy, and sticky – in a totally awesome way. 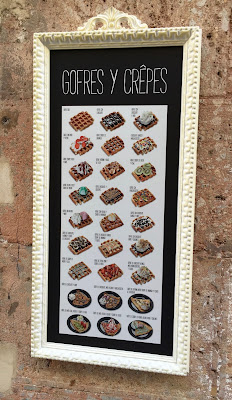 As we strolled back to the hotel for an early night, we passed a drug store. Adam suggested we go in and try to find bath bombs so I could take a nice relaxing bath back in the room. I said, “Cartegena is not going to have bath bombs!” But they did! Adam bought me one lavender and one vanilla bomb and we headed back so I could read my book in a hot bath, which was the end to a perfect evening. Ok, Cartegena, I forgive you.

Tomorrow: Granada (no Adam, not Granada Hills) and the Alhambra