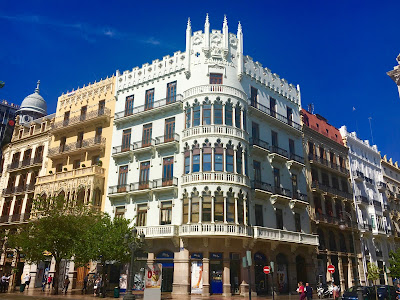 We had pre-reserved a rental car through Europcar, and planned to pick it up at the Barcelona Sants train station, because that was closer to our hotel than the airport. We took a cab to the station, easily found the rental counter and received our car. I was a bit worried that the pink monster wouldn’t fit in a tiny Euopean rental car, but the VW Golf handled it just fine. 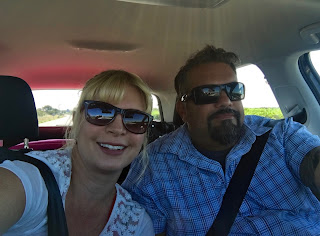 That's the pink monster, glowing in the back!

And…we were off! Using Google Maps GPS, we headed for Valencia. Because there is a Valencia, CA very close to us at home – and it is the location of Six Flags Magic Mountain – we kept joking that we were driving to Magic Mountain. Along the way, I introduced Adam to the wonders of gas station food in Europe. We stopped at a rest stop that had a full barista-staffed coffee bar, a fresh salad bar, freshly squeezed juices, hot handmade pizzas and sandwiches, etc. Seriously, if gas stations were like this in the US, I would actually spend more time (and money) there!

At the gas station, we saw a Lamborghini with rally race stickers on the side, and noted that it would most certainly go blowing by us back on the Autopista. It never did, but a few miles down the road, we found ourselves in the middle of the rally! A Porsche Panamera, F-Type Jaguar and Mercedes AMG GT with the same stickers all flew past. Sweet!

The drive was an easy three hours. I told Adam that kilometers go by much faster than miles. We both laughed. I know that’s because they are smaller – duh! But it’s true! It makes a trip feel faster!

When driving in Europe, finding a hotel and parking is always the most stressful part. We pulled into Valencia and found our hotel, but couldn’t figure out where to park to unload. Finally, we just pulled over, dumped the bags, and I stayed with them while Adam drove 4 blocks to the parking garage. 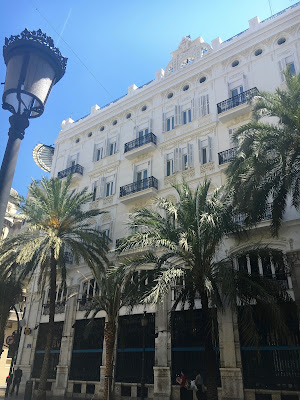 Our hotel was amazing!  It was the One Shot Reina Victoria, which was the first ever hotel in Valencia, built in 1913. I didn’t even know this when booking! I never read reviews when making reservations because people are crazy. I book purely on photos. If a place looks cool, I’m in. Turns out Hemingway stayed at this hotel while writing The Sun Also Rises in 1925. Faithful blog readers will know that I accidentally follow Hemingway everywhere he goes. Without planning to, I went all the places he did in Key West, Paris, Cuba, and now Valencia! It is like we are travel soul mates separated by a century. 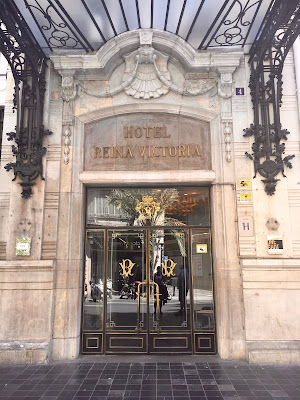 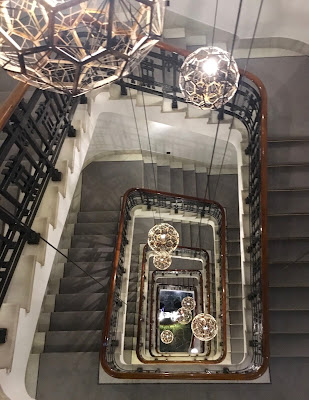 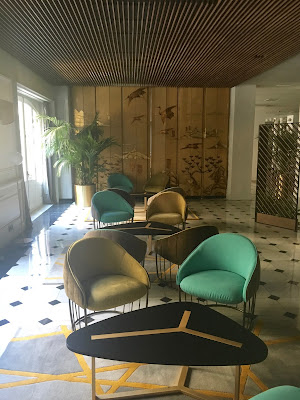 I loved Valencia. There isn’t a major landmark, so there weren’t many tourists. But for me, the attraction was the city itself. It is full of clean white baroque and colorful art deco buildings. Compared to Barcelona it felt more graceful – softer and brighter. Orange trees line the streets. 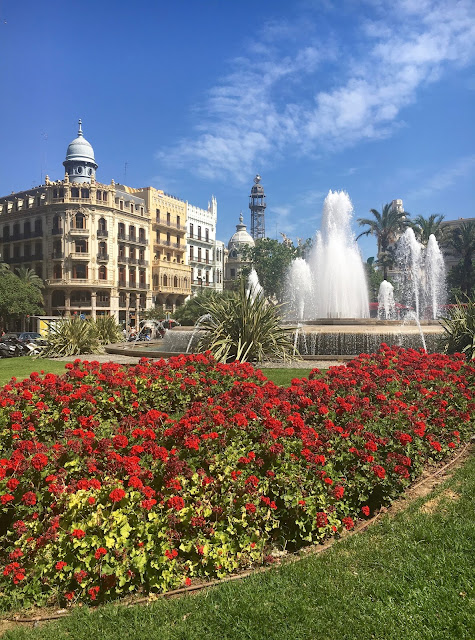 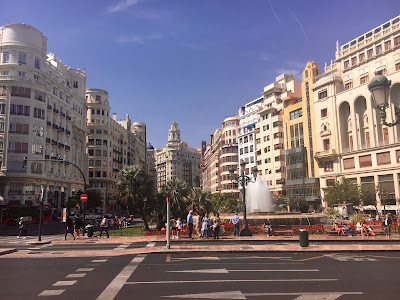 We walked around, taking photos and shopping. Adam scored a great vintage poster in an old dusty book store for $5. I stopped at a place called Zumm Salads to grab a quick sandwich and had the best turkey/cheese/green apple sandwich I have ever had. I also wanted to try fresh OJ since Valencia is known for its oranges. OMG. Best orange juice EVER. 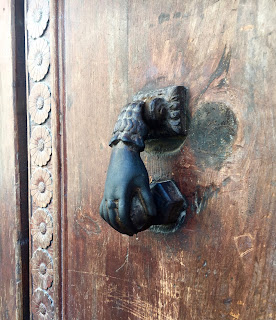 Valencia also has a section outside the historic quarter that is full of modern buildings. They are art museums, an oceanographic studies center, a zoo, and a few other things I don’t remember. It was such a nice, airy district – all centered around a huge park where locals run, ride bikes and picnic. 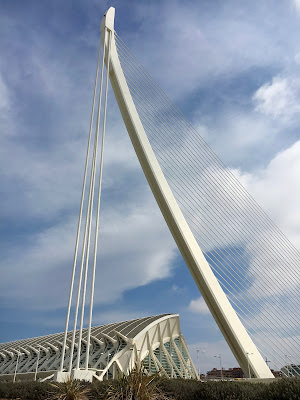 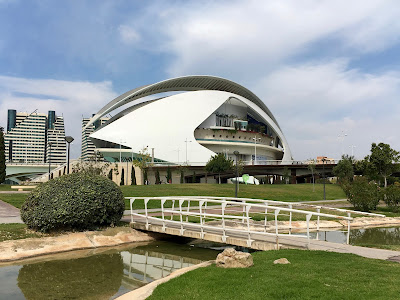 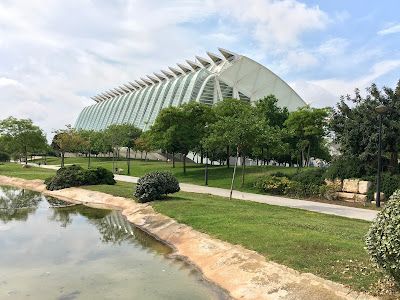 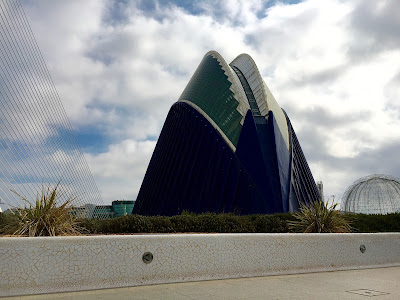 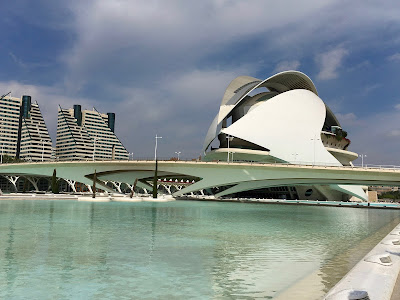 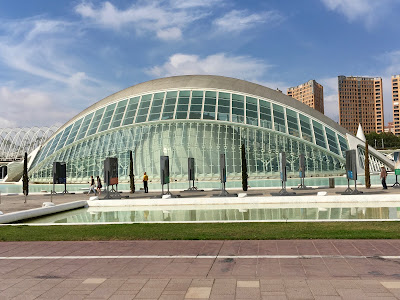 We returned to our historic hotel for showers, and headed out to dinner. We picked a place because it had my initials above the door (unrelated to the name of the restaurant, and we still don’t know why it was there). 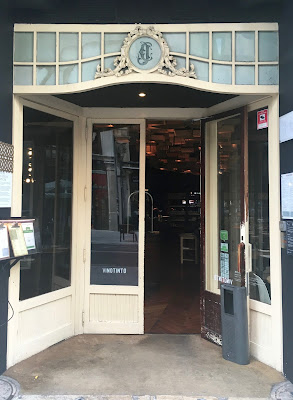 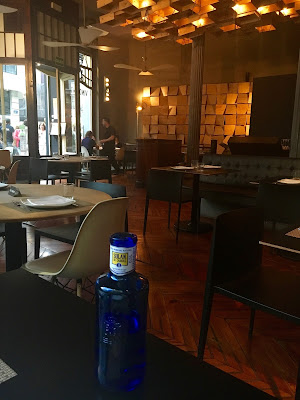 We arrived at 7:30, but the kitchen didn’t open until 8 (of course), so we sat on the patio and had sangria. When we finished dinner at 9:45, people were just starting to fill up the restaurant. But we were exhausted so we said buenos noches to Valencia. 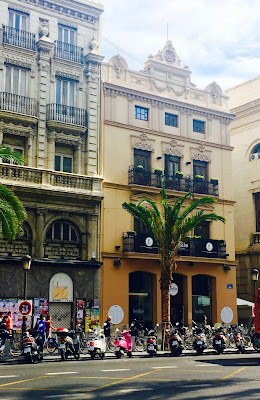 xoxo
Posted by Leadfoot at 3:25 PM