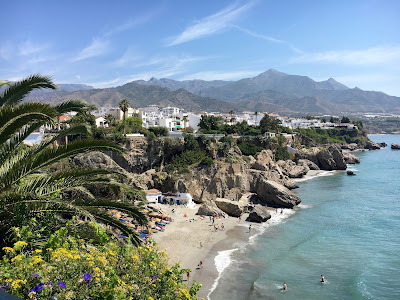 We wanted to get out of Granada, so we hit the road early and stopped at a gas station for fuel and a hot, fresh baguette. Today we would visit a few of the white hill towns of Analucia, starting with Nerja, on the beach. As we drove, we could spot them shining on the hillsides. Adam dubbed this part of Spain “Spain-torini” because it looked like what we had seen in Greece (though nowhere near as spectacular).

Nerja has beaches, but also a cliff-top promenade called “the Balcony of Europe” that overlooks the beach below. We walked to the end to take in the view while enjoying some cherry cheesecake gelato. (Yes, before lunch, don’t judge!) Nerja was tiny, the only other things we did were peek into the church and walk the one main shopping street. 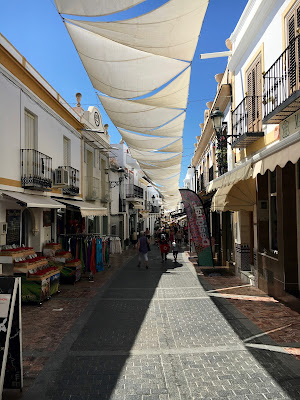 Shopping streets are covered in Southern Spain, to shade shoppers

Just 4 km up the hill was Frigiliana, another white hill town. We found it wasn’t worth the drive because it was mostly newer construction, nothing historic. So we were off to our next home for the night, in Ronda. As we drove we noticed we hadn’t seen any cows at all in Spain. Adam wondered if that is because they are all used for bullfights. It was a beautiful drive. Andalucia looks a lot like Tuscany. 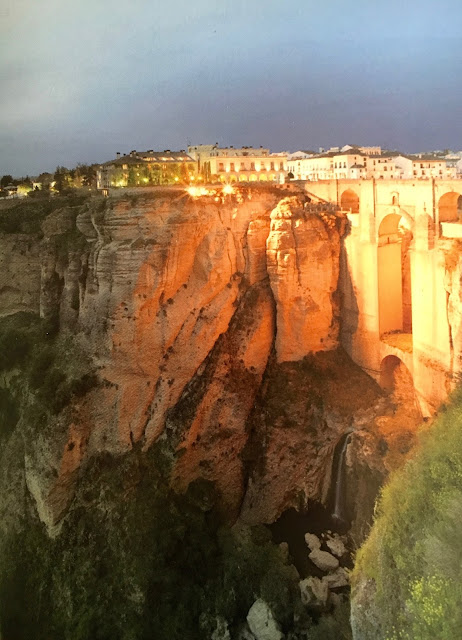 We pulled into Ronda and, while we knew our hotel would be on the side of a cliff, were in awe at just how on the edge of that giant cliff it was! A camera couldn’t even capture how deep the gorge was and how high up our hotel was! We walked into our room and both of our jaws dropped. Not only was it our largest hotel room so far, but it had a terrace that overlooked rolling farms as far as the eye could see. 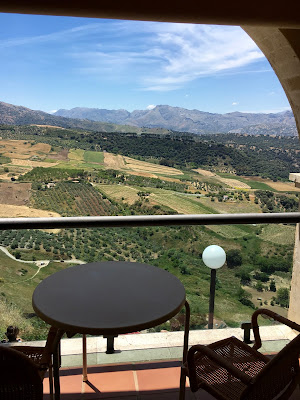 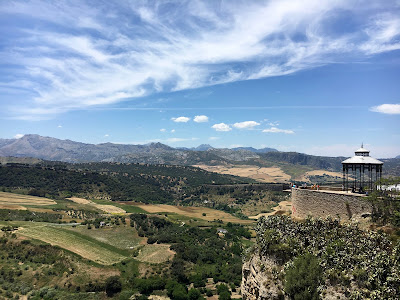 We grabbed sandwiches and baked goods at a shop across the street. Adam had ham (shocker), which we watched the man carve right off the leg – with the hoof still attached. Gag. 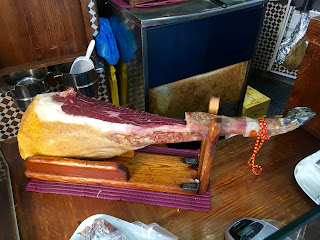 This place had salami though – so I had salami and cheese. I like to live on the edge sometimes. We asked for mustard, aka mostaza, but he didn’t have any. We ate our sad dry sandwiches as we drove to Setenil de las Bodegas, a nearby town under a rock. 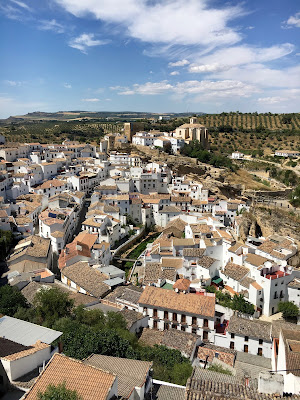 Setenil de las Bodegas from above

Now it was Adam’s turn to melt down. Even though I kept explaining that this town was UNDER! A! ROCK! – he had no desire to go. He wanted a nap. But he was worried about me going alone, so he went anyway. This town is tiny, and nearly impossible to drive in. The streets are barely one car width wide (we had to fold in the mirrors!) and often dead end after you squeeze down them. As Adam would back up, I would gasp because we were ½ inch away from scratching the rental car. He handled the driving like a pro – but my nerves – not so much. He told me to get out, walk the town, and he would go park above and wait for me. 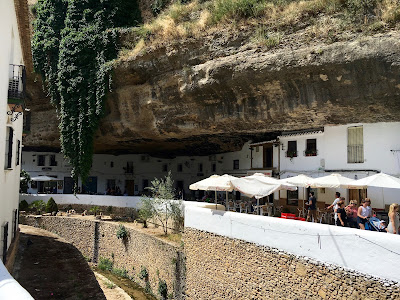 It is UNDER A CLIFF! 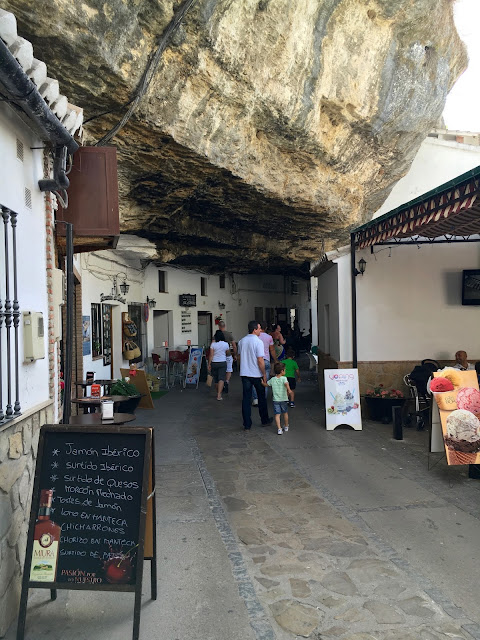 This tiny town, which dates to pre-historic times, was built underneath the rock overhangs of a cliff along a river gorge. While I wandered, I found a tiny store built into a cave that was full of tiny jars of vegetables and jam. I walked in, and asked the woman if she had mostaza. She spoke no English and I speak zero Spanish. 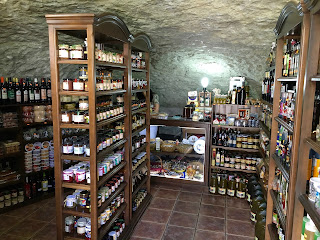 But she understood the word and said “ahh, salsa mostaza?” and led me to a shelf, where there was one jar of it. I paid her 2 euros for it and headed back to find Adam to give him the best peace offering ever – more impressed with my mustard find than the fact that this town was under a freaking rock! As I was walking up, he was walking down. He liked his present and we reached a mustard peace accord. We walked the town together and took photos. 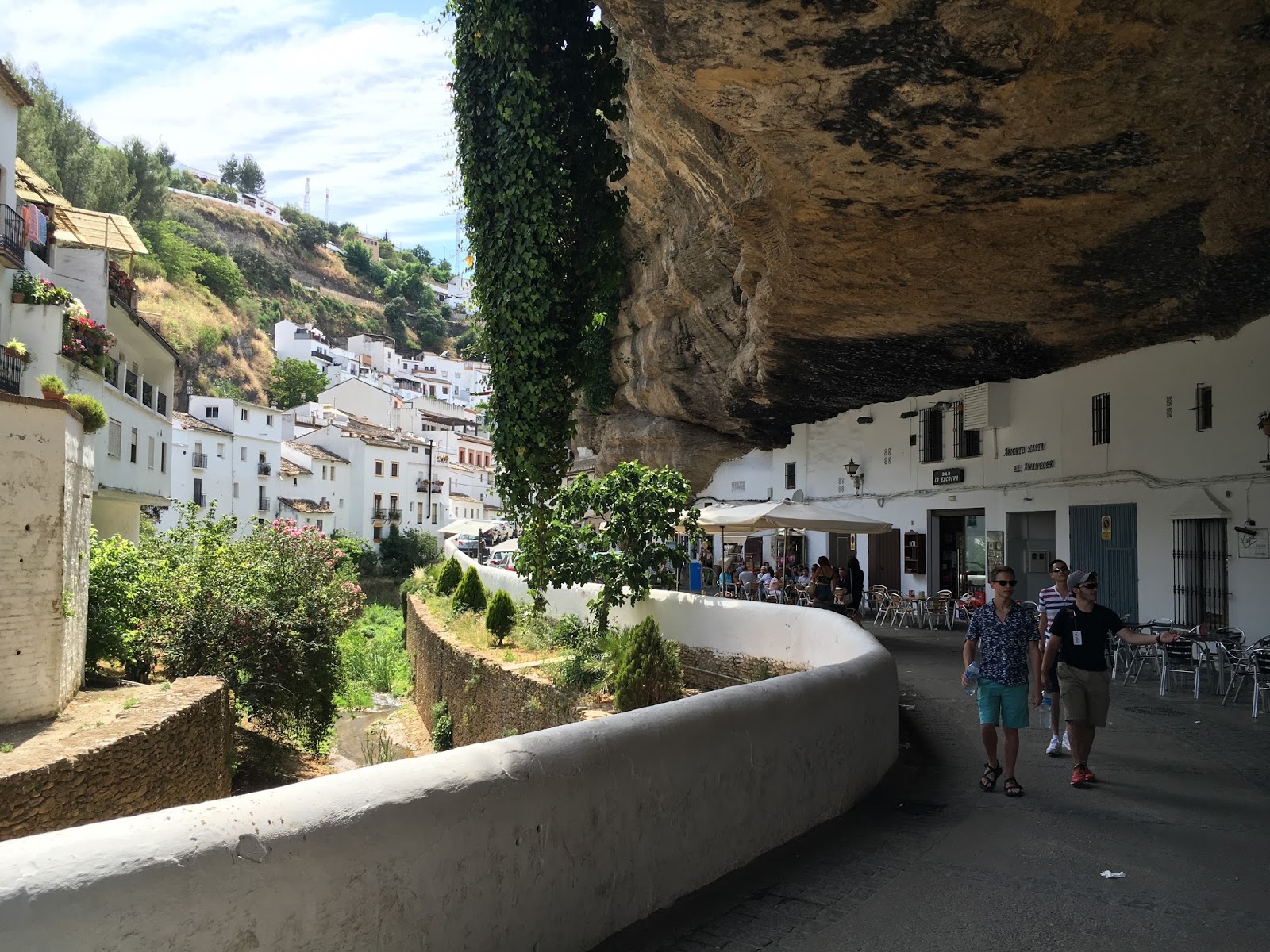 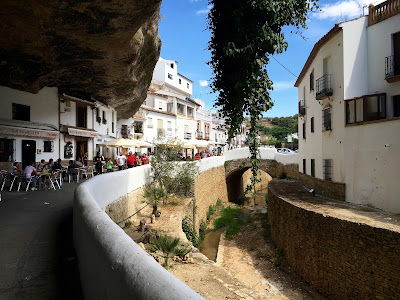 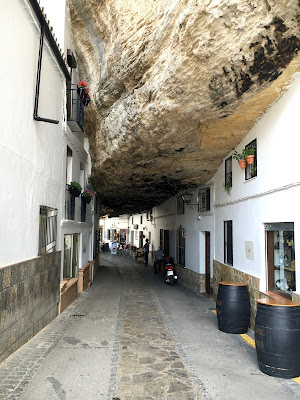 Back in Ronda, Adam took a nap while I walked around to see the bullring (the oldest one in Spain) and take more photos of that incredible cliff. 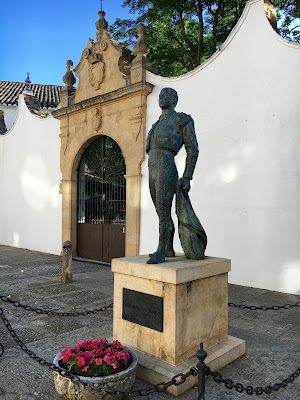 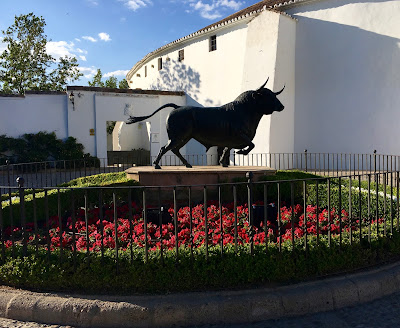 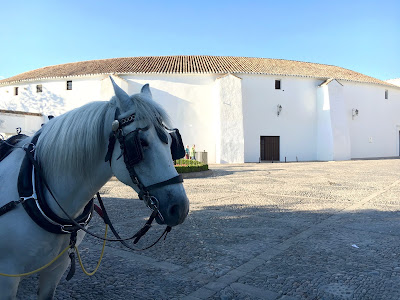 And then, as if the heavens sending me mustard wasn’t enough – they sent me kittens! I was walking through the park when I saw a small orange fluff ball playing in a planter. I walked over and found not one, but THREE kittens and a mama – the first cats I had seen in all of Spain. I sat and watched them for about half an hour because the cuteness was totally mood lifting! 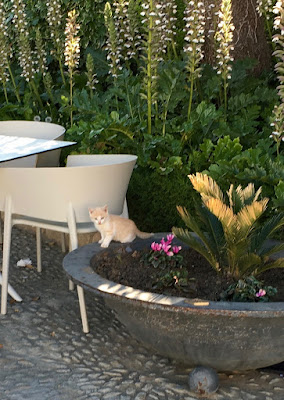 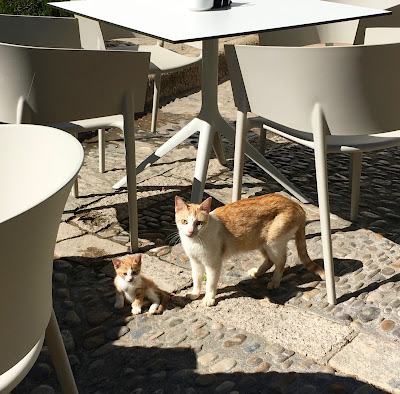 I went back and got Adam up for dinner. It was just staring to get dark (at 9:40!) as we walked the old town section of Ronda. We learned that in small towns, restaurants close earlier, and our options were limited. We settled into the only option in town, on a charming square in the shadow of the cathedral, and perused the menu. 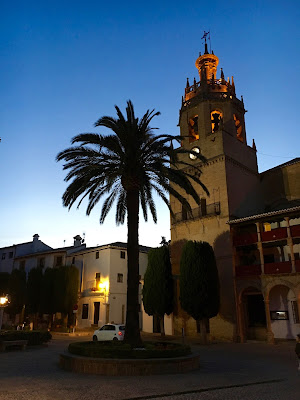 Our meat choices were baby lamb kidneys, blood sausage balls, sweetbreads – it was a HOUSE OF SPANISH NIGHTMARES. There was a photo of a baby pig leg with the hoof and everything on a plate. I ordered the “tropical salad” which turned out to be iceberg lettuce topped with canned corn and pineapple. The bread tasted like a campfire. The chef brought us a “gift” of breaded, fried mushrooms. Adam looked at me and said, “Babe, it’s like they have a cheat sheet of everything you hate!” He had garlic soup, which had egg in it and all I could taste was yolk. I started singing “Help Me Rhonda” to try to make light of the situation, which only helped a little. We ended up getting the special – Iberian pork steak. The waiter told us it was a baby, so it was red meat – like beef. Um, ok. It actually tasted good and was definitely more like steak than pork. I tried not to think about it and ate it. We had to get back because it was midnight and we had to wake up at 2am for the Cavs game.

I will leave you with more photos of the best view in all of Spain: 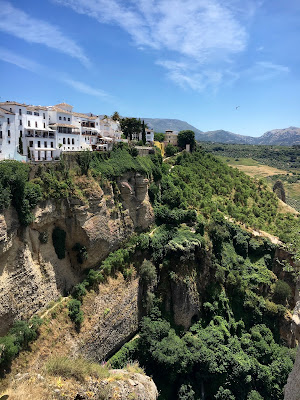 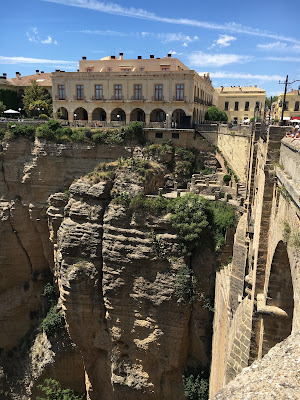 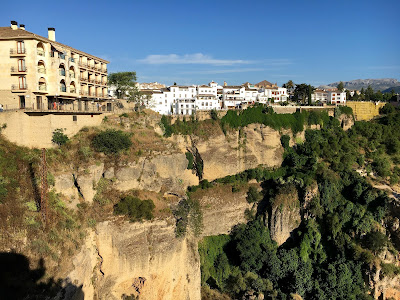 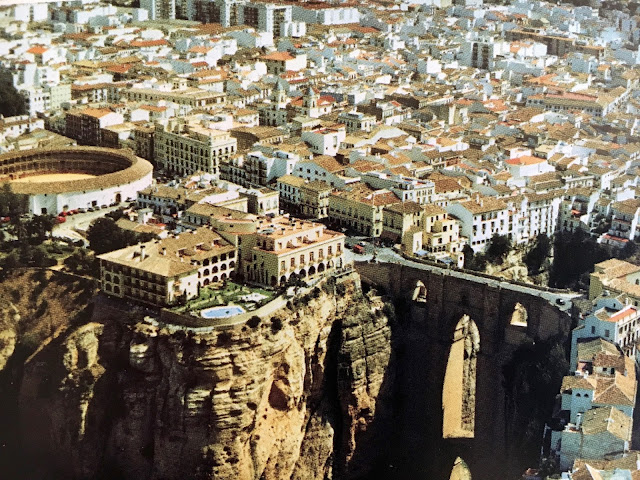 (Borrowed from a postcard) 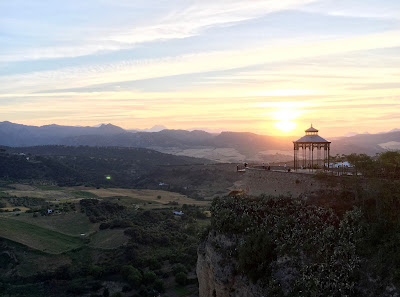 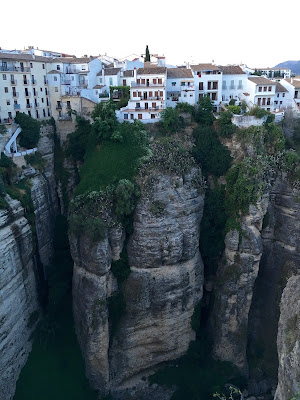 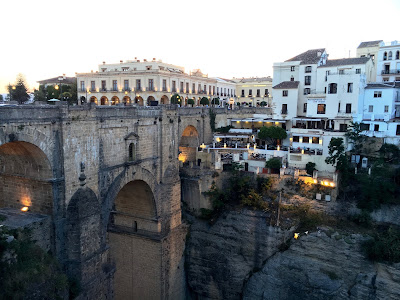 Tomorrow: Adam looks for the barber of Seville