(I’m now hopelessly behind (2 days), but will try to catch up tomorrow as we will be driving for about 3 hours.) 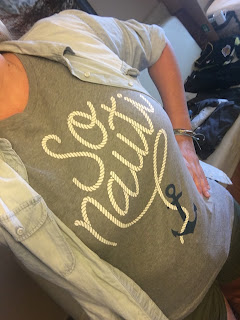 My last day of the cruise shirt

Today was our last day on the cruise ship, and it would be a day at sea as we sailed for Barcelona. We began at the breakfast buffet, and both agreed we would be happy to eat on land again. The same choices get old after 12 days.

We went down to the shops to wander the “Captain’s sale,” which was just more of the same trinkets and cheap jewelry that had been sold all week, then went to watch the Top Chef competition, which was pretty cute. The head chef picked 4 passengers to compete in a few quick fire challenges, and they eventually crowned a ship Top Chef. 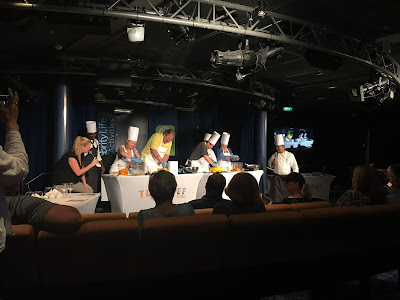 The lunch buffet was packed, and people were acting like they would never eat again after today. They set up a chocolate fountain and ice sculptures to make it a special last day for us. I had the penne Bolognese from the pasta bar, which was my favorite dish on the entire ship. 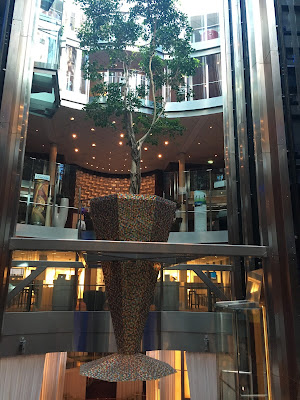 This doesn't show it well, but this is a full size tree, suspended in mid air, taking up 4 decks of the Equinox atrium

In the afternoon, Adam played poker while I went to the hot glass auction. They were auctioning off pieces they had made during our voyage. Most of them went for between $300 and $500. No, I did not buy any. I have seen similar pieces at Home Goods for $30. We also strolled through the art auction. One of Adam’s poker friends told him his wife had purchased a painting of poppies onboard the ship for $5000, so we had to go see it. Um, it appeared to be worth about $149, including the frame. Again, this is based on my knowledge of art at Home Goods. 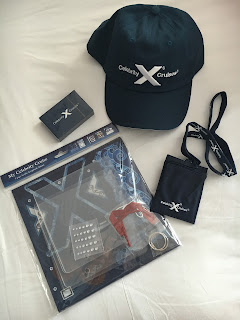 Then we had to pack, since our bags had to be out in the hallway by 10pm. Even with all our purchases, my bag didn’t appear to grow too much. We put the Pink Monster into the hall and went to dinner.

We had our final dinner in the main dining room, and had a window table, looking out over the sea. Then we went to the theater to watch the farewell show. A quartet called The Other Guys performed Jersey Boys / Frankie Valli songs. They were very talented! Then the captain walked out on stage and said, “Hello. It is me again. Your captain.” LOL! He wished us safe travels and said goodbye. 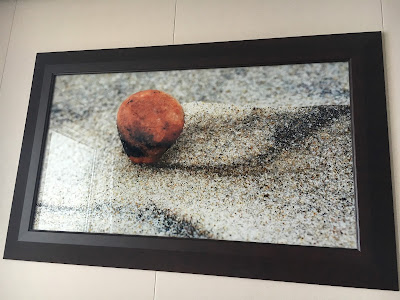 Back in our cabin, we said goodnight one final time to this large painting that hung over the foot of our bed. Adam had a name for it, but it is NSFB (not safe for blog). Then we went to sleep, knowing we had to wake up at 4am to watch the Thunder game and say goodbye to the Equinox once and for all.

Tomorrow: Our campaign in Spain begins!
Posted by Leadfoot at 11:20 AM