Spain Day Five: Granada and the Alhambra (Was All of L.A. Named After Spain?!)

(Adam would like to submit the alternate title of “Granada, not so hot-ta” for this blog post.) 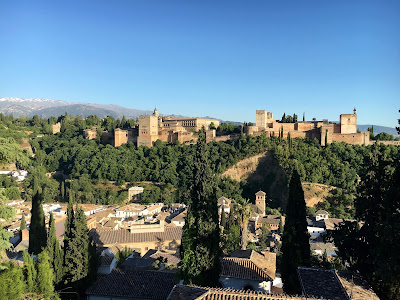 We woke up in Cartegena and ate our pastries we had purchased the night before, which weren’t as good as the times we went to a pastry shop and ate them fresh. But that’s ok – we had Spanish gas stations in our future! We hit the road and entered Moorish Spain. Suddenly, the freeway signs were in both Arabic and Spanish. Signs on shops and restaurants were also written in both languages.

(A bit of history on this region – the Muslim Moors that live in the South of Spain are not immigrants. They are Spanish. They have lived here for more than 700 years. They are not any more connected to Arabia than they are to England. They are indigenous people. Christians have tried to drive them out since Roman times. We would learn a lot about this ongoing conflict over the next few days.)

We stopped at a gas station and picked up sandwiches. Adam ordered his ham and cheese sandwich, then told the woman making them that I wanted just tomatoes and cheese on my bread. She said, “JUST tomatoes and cheese?!,” apparently unable to understand why I wouldn’t also want ham. And then a ridiculous conversation ensued in which she asked if I wanted my tomatoes in the form of sauce, sundried, or sliced. Did I want my cheese melted? Should the whole thing be toasted? This was at a gas station, people!!

The sandwiches we had been eating lately were good, but dry. We wished we had mustard. But it has been impossible to find in Spain. So we grabbed a handful of mystery condiment packets near the cash register and hopped back in the car. One of them turned out to be ham pate, which we called ham jam (nasty!), others were mayo, ketchup, and other NOT MUSTARD sauces. Then I had one packet left. It was called salsa mostaza, and had photos of vegetables on the front. I opened it and yelled “IT’S MUSTARD!!” It was delicious and my morning was complete. 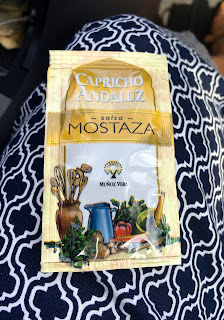 Our hotel in Granada, Casa 1800, provided excellent photo directions for how to get there, but it was still a pain. We had to drive into a restricted historic area, find a parking garage, hoist our luggage up 2 flights of stairs, find a cab that could take us closer to the hotel, then drag our luggage 3 cobblestoned blocks to the hotel. Our room had an amazing view of the Alhambra though, making all that effort worth it. 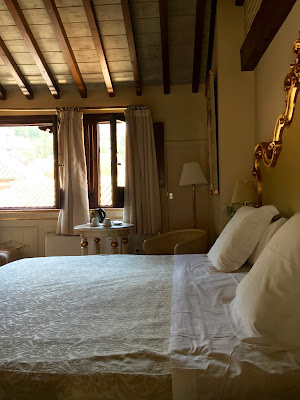 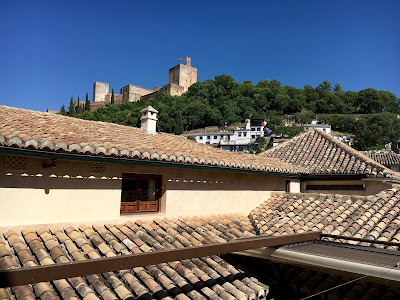 View from our window

There was no time to linger though, as we had tickets for 2:30 at the Alhambra. It was 1:00. We had to walk 15 minutes to find a random building in town called the Corral Carbon to print our tickets at a Ticketmaster machine, then hike up to the Alhambra. We had been warned it was uphill. But this was beyond uphill. It was up-hell. It didn’t help that we got lost trying to cut through a neighborhood, which looked like a shortcut on a map but actually added a second hill. Once we were finally on the correct hill, about halfway up – I had a meltdown.

Had this been the Amazing Race, this would have been the part when all cameras were trained on me as I burst into tears and sobbed “I have had enough! The spot on my flat feet where my arches are supposed to be is burning! I am hot and I think I smell! I can’t live on just tomatoes, bread and cheese! I hate how Spain tucks in their sheets way too tight on every bed and how you have to step on a pedal every single time you throw away trash! I hate eating dinner at 9pm! I miss my daughter and my cats! I just want to walk back down this hill and go home!”

Adam was a prince. He hugged me, wiped off my tears, and told me were were almost to the top (we weren’t) and then he literally pushed me up the hill. Once at the top, we bought water, and I felt better. We made it by 2:30 and entered the Alhambra Palace. 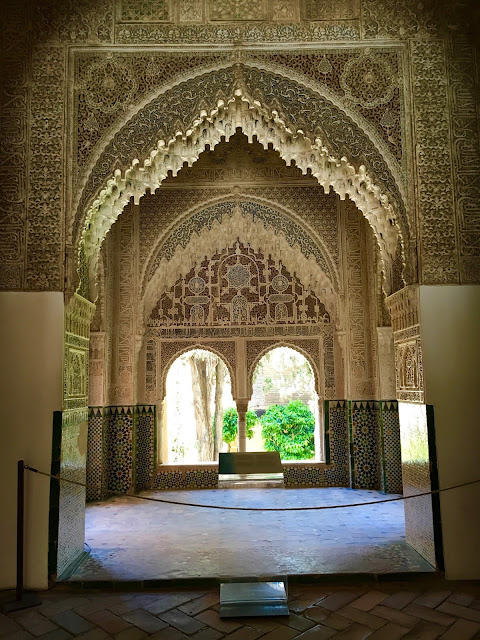 WOW. The climb was worth it. I felt guilty for my meltdown once I saw all the effort that went into making such a jaw dropping place – 700 years ago!

Spanish Muslims ruled their Moorish Kingdom from this palace until 1492. We saw the Sultan’s throne room, where 8017 inlaid wooden pieces cover the ceiling. In this very room, Christopher Columbus met with Isabel, Ferdinand, and other Spanish leaders to make his final pitch to sail to the Orient, and convinced them that he could reach the East by sailing West. 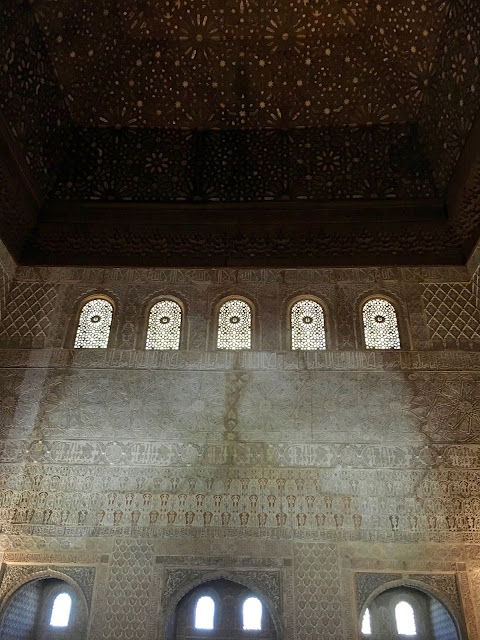 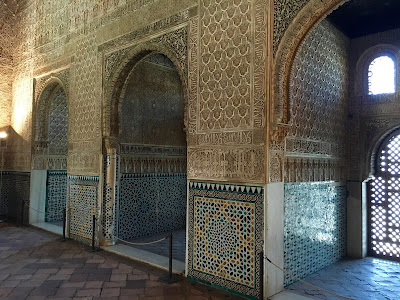 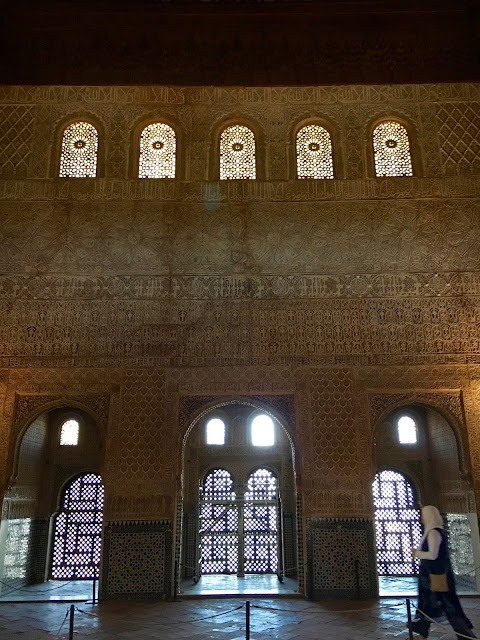 There are no paintings here like in castles or cathedrals. Muslims believe that only God (Allah) can create the human form, so they don’t paint humans. Instead, their artwork was in the form of intricate, smooth stucco that covered every single surface of this magnificent place. The stucco is carved with script to deliver religious messages via words instead of pictures.

It should be noted that each of my photos in this post took a great deal of patience and time as we waited for the throngs of other people touring the palace to move along. It was crowded and they let people mostly wander freely, so photography was a bit difficult. 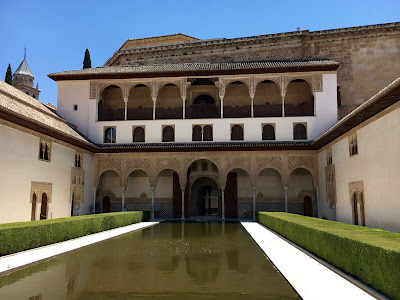 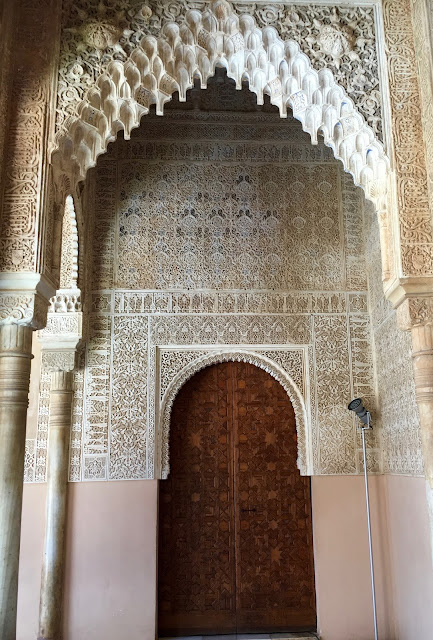 The Alhambra also has great views over the old Moorish Quarter (where we were staying) and the gypsy colony in the caves on the opposite hillside. We were hungry, so we hit a café on site at the Alhambra and I had a – you guessed it – tomato and cheese sandwich – dry, no mustard. 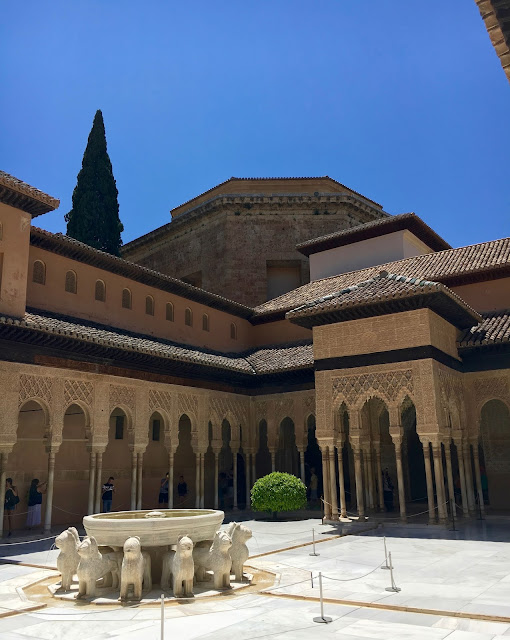 We were about to walk back down when we saw a sign that said TAXI. WHAT?! It is possible to take a taxi up and down this mountain?! I was not amused. I hailed the first cab that pulled up, and 15 minutes and $5 later, we were back on the plaza near our hotel. We enjoyed the free tea hour at our hotel, then walked beside the river that runs along the base of the Moorish quarter hill.

We had read there was a great viewpoint at the top of this hill, which overlooks the Alhambra and is a great place for photos. Ugh. Fine. Let’s do this. At this point, we were both pretty crabby and sick of mountain climbing, but we did it, got our photos, and plopped down into chairs in a restaurant just below the St. Nicholas viewpoint for some bad, expensive Sangria with a world-class view.

I feel bad being negative, but I want to be honest about our trip so others can learn from our mistakes. I realize that travel is a wonderful privilege. I appreciate every moment of it – even the more challenging ones. Today was just exhausting, and neither of us found Granada (with the exception of the hour at the Alhambra) worth the effort.

We trudged back down the hill towards our hotel, ready to surrender and go to bed. But… as often happens just when needed most… we found a great little street that peaked our curiosity. It was full of Moroccan tea rooms and dark, tiled restaurants full of pillows. We ducked into one and ordered hummus, tabouli, chicken tagine, a meat pie (chicken in pastry, dusted with cinnamon and nuts), tea and dessert. It was awesome!!! The couple next to us was from New Zealand (via India). They asked us to take a photo of them, and a lovely conversation ensued. Adam and the man talked cameras, we helped them find the spot to pick up Alhambra tickets and circled it on their map, we discussed our travels. By the end of the meal, Adam told the man he reminded him of his dad. We had made friends, shared a good meal, and most importantly, felt emotionally refreshed. 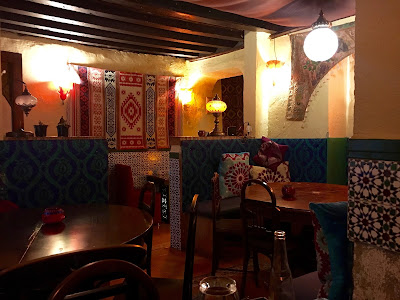 Dinner in a 500 year old building!

We wandered through the old silk market and around the cathedral before finally hitting the sack.