This trip will also feature guest traveler Adam, as Miss Madelyn is still in school. We are off on a grand European adventure involving a 12-day Mediterranean cruise and a week in Spain. 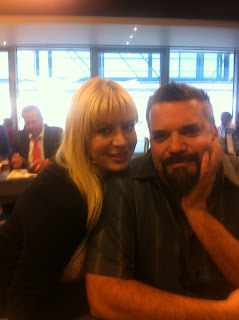 I’m currently not sure what day it is, or what time. We’ve had an eventful 48 hours with very little sleep!

We left LAX Tuesday at 6pm for a 12-hour flight to Germany. We chose Air Berlin because the prices seemed low. Wellllll…… as we’ve all learned in the past (I’m looking at you, Spirit Airlines), low prices don’t always mean you will actually spend less when it is all said and done. 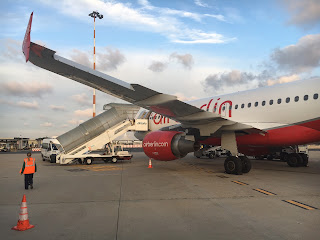 Air Berlin, whose logo is just a little too close to comic sans for comfort

Knowing I was going to be gone for 21 days, I bought a new suitcase. A very large suitcase. It’s actually the largest suitcase both Adam and I have ever seen. It also happens to be bright pink. Adam dubbed it “The Pink Monster.” As we rolled it through LAX, a man actually pointed and said to his wife, “Look at THAT suitcase!”  I knew it would weigh more than 50 pounds, and I would have to pay an overweight fee. I was fine with that. I needed 21 days worth of conditioner, cute outfits with coordinating shoes, and books to read while floating around the Mediterranean. So we rolled her up to the counter at Air Berlin and the agent said, “your suitcase weighs too much.” “I know,” I responded. “I will pay the extra fee.”  “Ok,” she said, “That will be $120.”

WHAT?! I could literally buy another suitcase and check it for $120 on most other airlines. I asked how much it would be to just check a second bag. “$210, ma’am,” she said. As I debated in my head whether to tell her that was ridiculous or not to call me ma’am, Adam was telling me I made the right choice. It involved math so I tuned it out, but something about the $60 bag fee we already paid plus $120 was less than $60 for the first bag and $210 for a second. FINE! Take my money, lady. 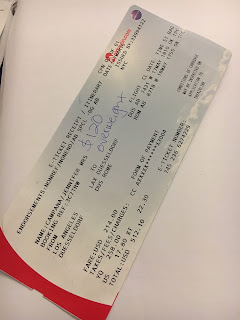 The Cavs game was about to come on and we had to make it through security and find a sports bar. The TSA line was long, but nothing close to the horror stories we saw on the news that morning. We quickly hit Border Grill and the Vanilla Bakeshop before finding a sports bar right across from our gate. (Seriously, why would anyone go to any other LAX terminal besides Tom Bradley?!)  We watched about 3 minutes of the game before I realized everyone had boarded our flight. Adam assured me we had plenty of time, but I am a worrier, so I wandered over to the gate just as they paged our names over the loudspeaker and said we were the last 2 passengers to board. Oops!

Now the good news about Air Berlin – the flight was empty! Seriously, empty. There were about 40 people on an airplane built for 300.  We all spread out, and could actually lay down to sleep. This was, of course, after I gave them another $30 for wifi so I could follow the Cavs score online. 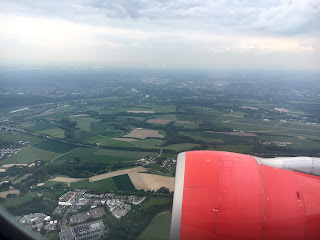 We landed in Dusseldorf, Germany at 2pm (5am LA time) and left the gates area to meet my dear friend Kathleen for lunch. She lives in Frankfurt and was kind enough to take the train 2 hours each way to meet us. After a lovely catch-up, Adam and I had to go back through security and find our flight to Rome. There was no line at all! Ugh. I have major airport envy for anyplace that isn’t LAX. 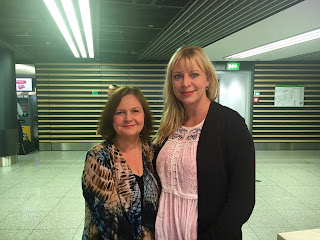 Met up with this lovely lady!

We took naps on the plane and landed in Rome around 8pm (11am LA time) and had to take a shuttle bus from the tarmac to baggage claim. As we were riding, Adam looked out the window, pointed excitedly and said, “There’s the pink monster!” It was on a luggage truck about a quarter of a mile away. Ha!

We found our driver, Maurizio, who we had pre-arranged through Civitavecchia Shuttle Express. Civitavecchia is the port for Rome, but it is actually 60 miles to the north, and there is no cheap way to get there (at least at night). We paid 110 Euros for the private transfer, which took about 45 minutes. But we did a ton of research in advance, and that was the going rate. It was still cheaper than spending the night in Rome and taking the train in the morning because hotels in Rome are expensive.

Besides, we had both been to Rome before. It isn’t our favorite. So we spent the night in the Alibrandi Palace in Civitavecchia. It was cheap and clean, and is the closest hotel to the port entrance, but also has the loudest water pump in the entire universe. We walked to find some dinner, strolled around the old fort designed and built in 1508-1535 by Michelangelo, and went to bed at about midnight (3pm LA time for those keeping track). I knew the Thunder game would be on at 3am, and since 12am Rome time/3pm LA time felt more like nap time than sleep time – I woke up at 3am and found the game streaming online (thanks Periscope!). I woke up Adam, and we watched the entire game, on my iPhone, in the middle of the night. I tried to go back to sleep at 5:30 am, and managed to get about 2 hours in before our neighbor decided to take a shower. HOLY LOUD NOISES, Italy! It was like she was taking a shower while simultaneously hitting the wall with a hammer right inside our room. I never went back to sleep. 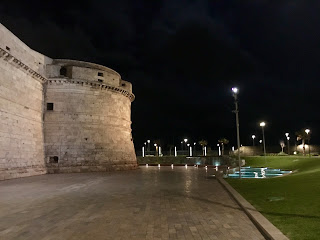 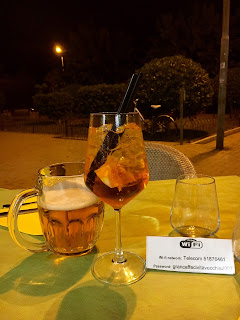 My favorite Italian cocktail, the spritz. And the world's longest wifi password.

After breakfast at the hotel, we walked to the port, took a shuttle bus to the ship, checked in, and walked right on – with no wait at all. The Celebrity Equinox is BEAUTIFUL. There is even a real-grass lawn on the top deck!  We will be sharing a lot more about her in coming days. 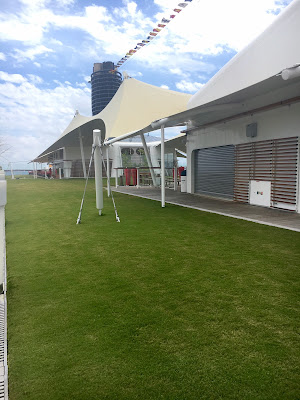 We had decided to upgrade to concierge class, so when we arrived in our cabin we found a free bottle of champagne, binoculars, fresh fruit and a canvas tote bag. Yay! Gifts! At 4pm every day, canapes get delivered. Our cabin also has an extra deep balcony with full lounge chairs on it instead of just regular butt chairs. It’s going to be a fab 12 days! 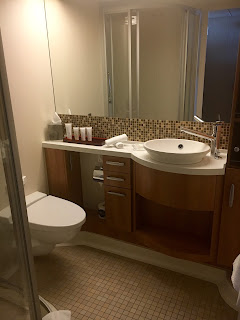 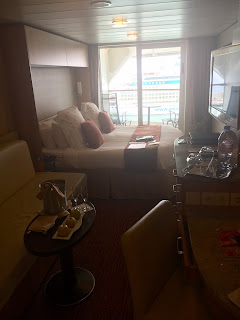 I paid $299 for a high speed internet package (Gotta stream those Cavs games! I’m NBA Playoffs obsessed!) for the length of the entire cruise. Adam looked into a booze package but it was $920 for unlimited premium drinks. Um, no. 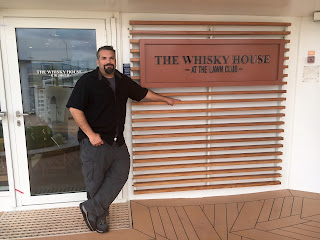 Adam got really excited to see this!

So here we are. I am forcing myself to stay awake today. I have a strict “no naps rule” to defeat jetlag and get on the right time. But rules are made to be broken and Adam is napping next to me as I type. He will regret that later when my alarm goes off at 3am to watch the Cavs game and his body clock gets further messed up. Oh well. Nappers gonna nap. We have set sail and are off to dinner. Go CAVS!! 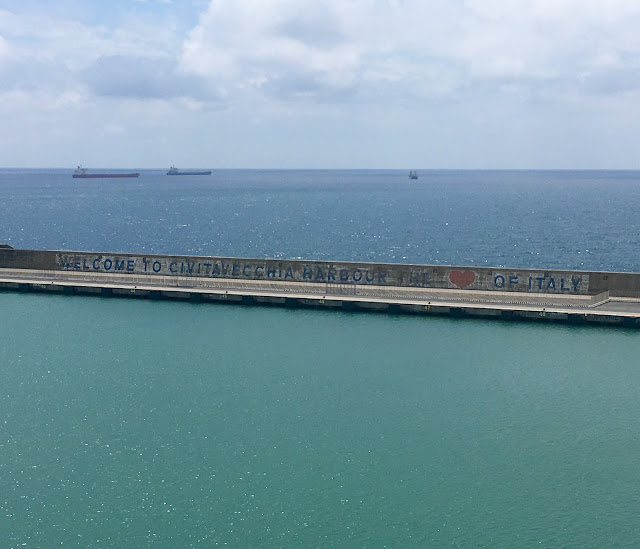 Tomorrow: The Amalfi Coast and Pompeii

xoxo
Posted by Leadfoot at 9:20 AM