Today started at 2:30 am, when I woke up to watch the Cavs game, after only 3 hours of sleep. We had to watch it via Periscope (for you mom, Periscope is an app that lets Twitter users live broadcast anything. So people can set up an iPad, point it at their TV, and broadcast a game). The guy broadcasting it was in France, and somehow had a bootleg direct feed right from the Quicken Loans Arena humongotron. We saw what was happening in the arena during commercial breaks instead of commercials. Cool! I speak pretty decent French, but not basketball French. I caught every third word or so. But that was ok as long as I could see the Cavs win. The guy broadcasting it was cheering for the Cavs and kept saying “Ohhhh lo lo lo lo lo lo lo” every time they scored, which cracked us up. Best broadcast ever. We went back to sleep at 5 and woke up at 7 to get ready to meet our tour group. 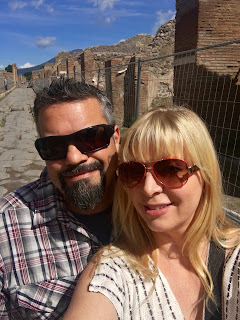 Once we found our group outside the ship, we were off to Pompeii. Our driver Tony was super cool and promised to give us an authentic experience. 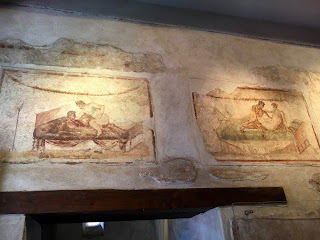 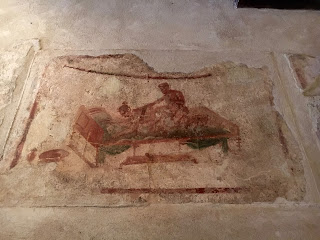 Above 2 photos were paintings depicting the brothel menu options 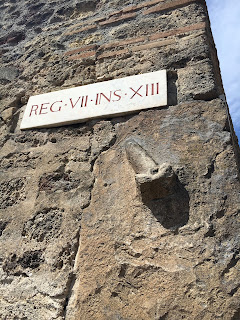 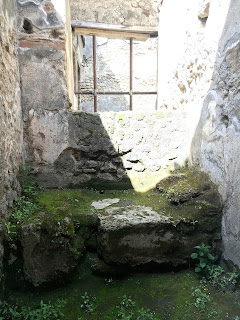 Bed in the brothel - made of rock. Comfy! 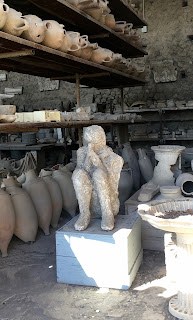 Cast of a victim who died in the volcano eruption, covering his face to try to breathe 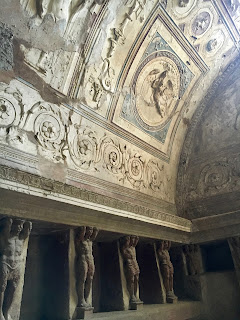 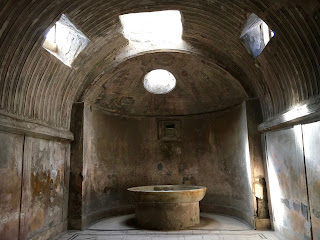 Inside the excavated bath house 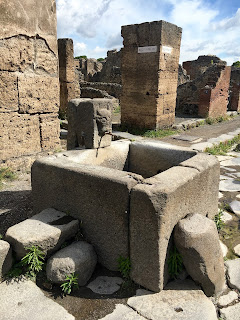 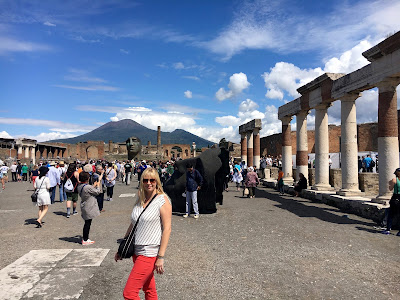 We stopped for a glass of fresh squeezed lemonade outside the gates and were on our way to the Amalfi Coast. 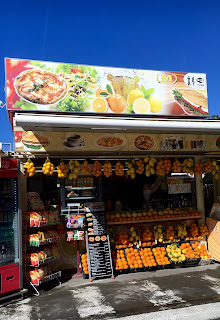 Wait! Not so fast… turns out the tunnel was closed and traffic was very backed up. But because Tony was local, he knew a secret road over the mountain that would take us to the bottom of the Amalfi coast. We would do it from south to north instead of north to south. Of course this meant we would have to go all the way BACK south at the end of the day to board our ship by 6pm. “Don’t worry!,” said Tony. Then he jokingly told us that “when Italians say ‘don’t worry,’ you should worry three times.” Um, yah, that would come back to haunt us later.

On the very top of the mountain, we stopped at an orange stand, where the vendor gave us samples of the most amazing blood oranges. Of course, we bought some. This little pit stop also had the most amazing view over Naples and Mount Vesuvius – which, by the way, is still an active volcano. More than 3 million souls live right at its base. Let that sink in for a minute. 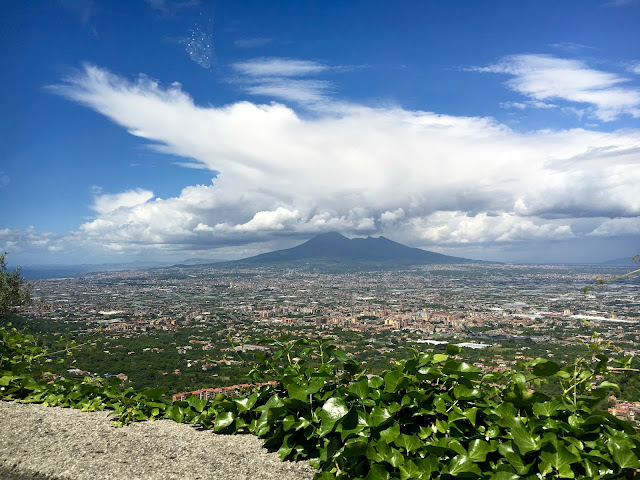 Next we stopped in Ravello, where Tony recommended a place for lunch. He told us, “Go right at the church, then to the left of the art gallery walk down this really narrow little alley, all the way to the back, and when you see a restaurant at the end, ask for Mama. She has a ravioli that will make you cry.” We found it, and ordered the ravioli. I didn’t cry – but it was pretty amazing. When we walked out, the sky was crying. We ran back to the van in the rain. 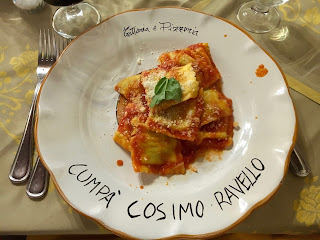 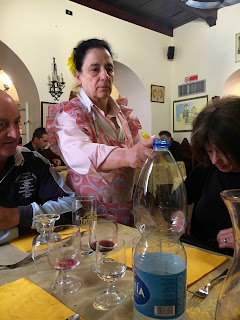 Tony told us to run out into the rain in the next town, Amalfi, just to see the church, because it was worth it. By this point, it was POURING. We all ran up the massive staircase to the church, when I turned and noticed Adam wasn’t behind me. I figured his tendonitis prevented him from making the climb and he would wait for us at the bottom. 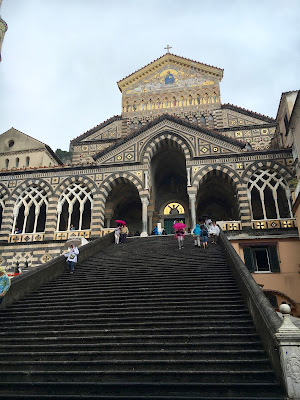 We all took our photos, then ran immediately back to the van. Adam was nowhere in sight. We waited, and waited, and waited. Finally, I went to look for him, and found him buying Limoncello. He told me that he had climbed the stairs after a bit, went through the church, and thought we must have went elsewhere, so he stopped to buy souvenirs. At this point, we made a pact – “Never, EVER leave the group.” 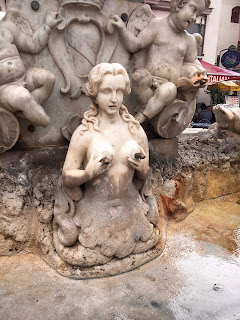 Back in the van, we headed for Tony’s home town of Positano, where his family has lived for 7 generations. He showed us the house his father was born in 75 years ago, and said that recently, someone offered him $60 million dollars for that house. But it was all they have ever known, it is home, and it overlooks the sea -- so they said no. 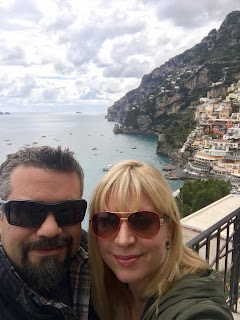 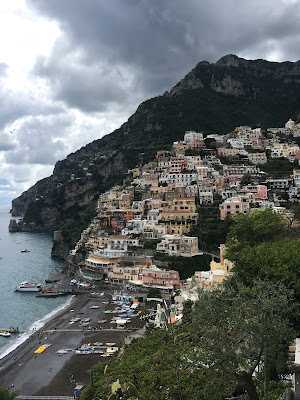 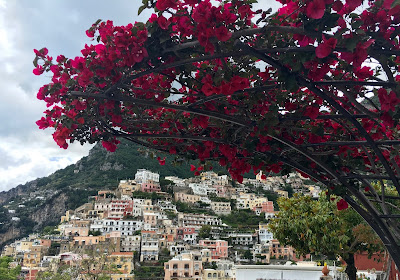 We got out of the van and wandered the town on foot, taking photos of the beautiful hillside vistas. We hit a café for some pear ricotta cake (yum!) and espresso (so strong!). Then Tony picked us up and whisked us up the rest of the Amalfi Coast. He stopped to buy us (another!) espresso and Italian pastry at a little café along the route. 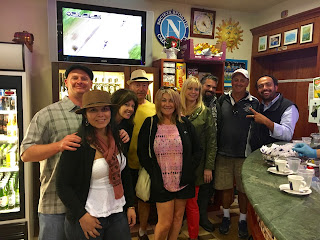 Our tour group. Tony is on the right.

At this point, we all were starting to get a little nervous. It was 5pm and we were all the way on the north (wrong) end of the Amalfi coast. “Don’t worry!,” said Tony as the rain picked up.

We wound our way back down and as we got closer to Salerno, could actually see the ship in the distance. But traffic came to a complete stop. Adam bet me 5 Euros we would be back by 5:35. I easily won that bet. 5:40 came and went… 5:45…. We finally pulled into the port at 5:50 and Tony did his best Mario Andretti impression to get us over to the ship. We screeched up just as they were pulling in the first of two gangways. Whew! It was SO close. In Italy – always worry three times.

After dinner, we hit the casino. Adam gave me $100, and after an hour of playing slots, I turned it into $112. He took the $112 and turned it into $0 playing blackjack in about 20 minutes. Sigh. I was exhausted, but really wanted to see the hot glass show on the top deck of the ship. At 10pm we headed up and huddled under big blankets with all the other spectators. It was really cool, informative, and they raffled off some of their glass pieces. Continuing our day’s luck… we did not win.

Oh well, at least there was no overnight NBA playoff game, so we could sleep! Yay! 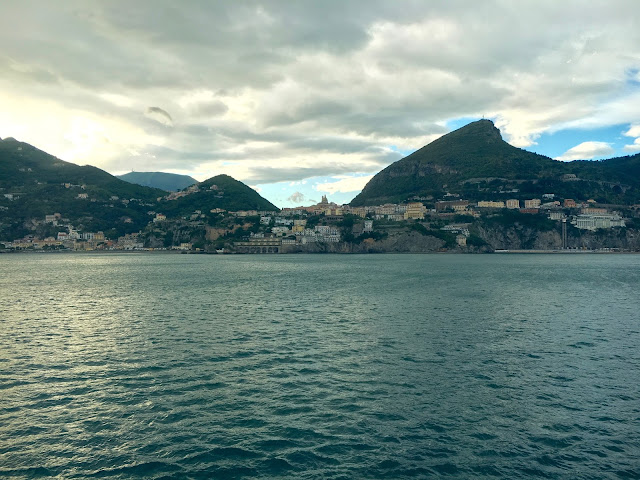 Sailing away from the Amalfi Coast.

xoxo
Posted by Leadfoot at 1:58 PM