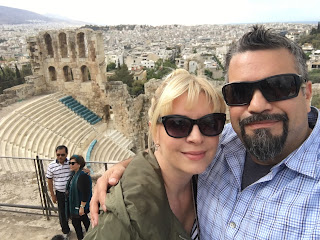 I’m still being affected by jet lag, so I only got 3 hours of sleep, then woke up naturally to watch the Cavs game at 3am. When the sun came up, we were docked in Athens at the world’s largest port -- Piraeus. Adam went out on the balcony to survey the scene and said, “Babe! Come here!” I joined him on the balcony to see hundreds of tents housing Syrian refugees on the other pier. We had read in advance that half of the Athens Port was being used to house refugees. But I expected they would be in a terminal building – not in tents on the pier. We saw women in full hijabs walking to use a long line of port-a-potties and children playing next to the water. It was sad to think of them living like that for so long, and we wondered what they must think of us pulling in on a giant luxury cruise liner right next to them. 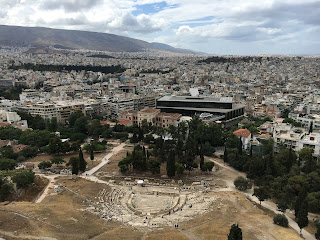 From atop the Acropolis looking over Athens

We hopped in a cab to head to the Parthenon, Athens’ must-see. As soon as we got in, Adam looked at me and said, “it smells like Pirae-ass” and I had to stifle giggles the whole way. It was a 20-minute ride and there was nothing – and I mean nothing – to see. I’ve never been to Russia, but Athens looks like how I imagine a big Russian city full of 1970s architecture. All beige, all square. Booooring. It's like they did the most amazing things in 400 BC and then just gave up. 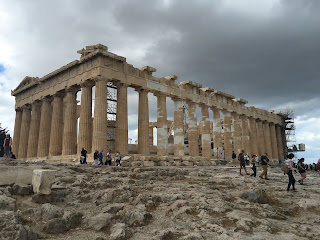 We got there early to try to beat the crowds, which turned out to be a good call. But we had to climb about 500 million stairs, all made of slippery marble. It was cloudy so I said, “I sure hope it doesn’t rain because these stairs would become treacherous.” Apparently, at around the 350 millionth step, I looked at Adam and growled, “Athens is bullshit!” -- though I don’t exactly remember that because I was suffering from a lack of oxygen to my brain. However, it would become our tagline for the day. 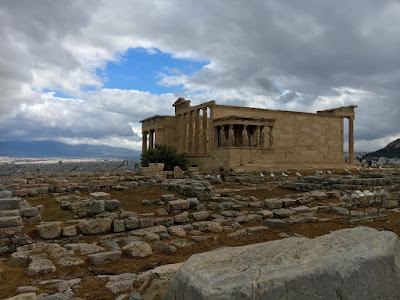 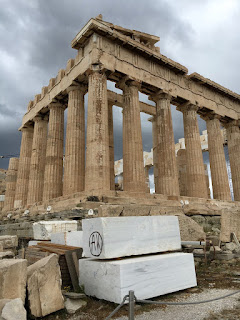 We finally got to the top of the Acropolis, where we listened to the Rick Steves audio tour on my phone, with earbuds and a splitter. I kept forgetting we were attached, and walking away. Oops! We put Rick on 2x speed because nobody has 45 minutes to listen to him babble about ruins. So we basically had the chipmunk tour of the Parthenon. It is 2500 years old, blah blah blah. Just as we were finishing, the skies opened up and POURED rain on us. This of course meant we had to very carefully descend 500 million marble stairs that were now WET. I mean, duh, ancient Greecians! People don’t put marble on their bathroom floors for a freaking reason! 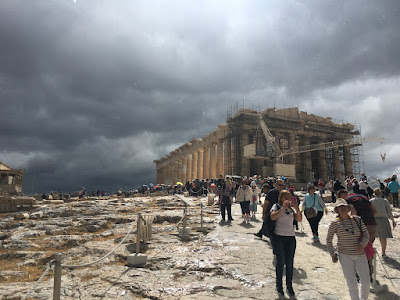 The sun broke through while it was still raining!

By some miracle, we made it down in one piece and walked to Anafiotika, which Rick Steves calls Athens’ most charming district. It was literally covered with graffiti. Adam called it Greek-fiti. Some of it was quite good, but it also kind of ruined the old-world charm. 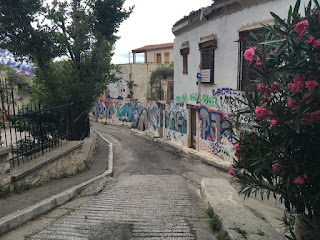 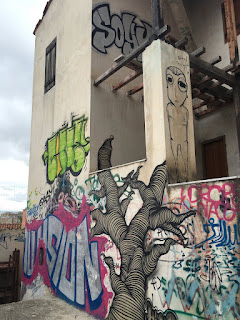 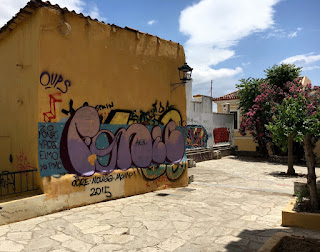 Next we walked through the Plaka district where we did some shopping. I bought a few bracelets, the requisite Christmas ornaments and body butter made from olive oil.  We found an amazing old bar called Brettos. If you are in Athens – GO HERE. They have 200 different flavors of vodka, which are beautifully displayed on a backlit wall. 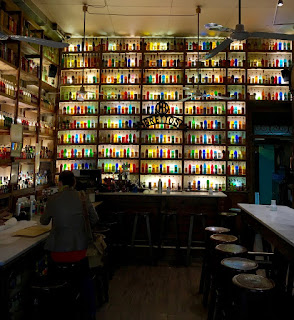 The bartender recommended a restaurant called Byzantine/Vizantine (in Greek) for lunch. As we were deciding what to eat, the owner said, “do you want to see my kitchen?” Awww. We had amazing oregano potatoes, chicken, greek salad, leek croquettes and salmon. 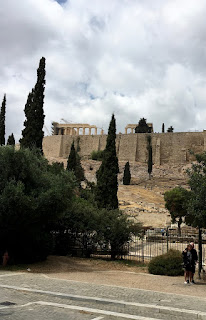 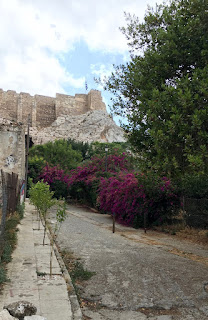 Then we walked around some more, taking photos of the Acropolis from the bottom. All the pedestrian streets are marble too. WTF, Athens? I guess slip-and-fall lawsuits are not a thing here. 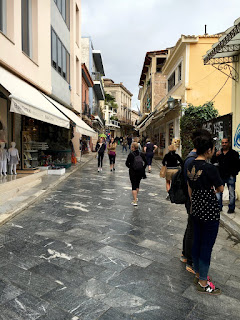 We were kind of over it, and really tired, so we grabbed a cab back to the ship and stopped in the Duty Free store in the terminal building. We bought some liquor made of pistachios called Mistral Tears, purely because the name made us laugh. We had no problem smuggling it onto the ship.

Back on the ship, we saw the Flying Dolphin Ferry come in. We would need to take that ferry in the morning to escape Athens on Day 2 in this unattractive port, so we followed it and carefully took note of where it docked.

We ate dinner in the main dining room, which consisted of the Top Chef winning recipes from past seasons – while we overlooked the refugee camp across the way. That was enough Athens for us, so we went to bed at 11. 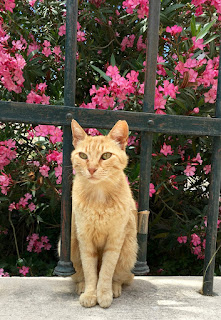 Tomorrow: Athens redeems itself in a big way (mostly because we leave!)