Mediterranean Cruise Day Four: The Race for the Flying Dolphin

Sadly, the Celebrity Equinox was spending TWO days in Athens. We knew that one day was more than enough, so we planned to head to a small Greek island instead. We would get way more than we bargained for – in the very best way. 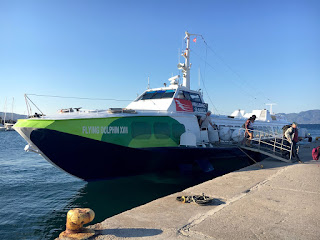 We woke up at 5am to catch the Thunder-Warriors game, also knowing we had to meet our pre-arranged group at 6:45am for the 7am Flying Dolphin ferry to Aegina. Since we had spotted its berth in the harbor yesterday evening, we knew where we were going. Or so we thought. We expected it would be quite a walk, so we allowed half an hour. But as it turns out, distances are deceiving in the world’s largest port. You know how when you are in Vegas and you say, “Oh, sure, I will walk to the Venetian, it’s right there!” And then after 45 minutes of walking, it still looks the same distance away and you are all WTF Vegas!? Yah, it was kind of like that. But worse. After 30 minutes of walking, we realized that we had only 5 minutes left to catch the ferry, and we were about halfway there. I was ready to throw in the towel, when a cab rounded the corner. Adam flagged him down and asked him to take us. The driver tried to tell us, “but it is right over there, you can walk.” I said, “We only have 5 minutes! Go!” as I jumped in the back. He hauled ass and pulled us right up to the gate. Adam grabbed the tickets from my hand and sprinted to the ferry, and held it for me as I caught up. As soon as we stepped on board, they pulled in the gangway and we were off. Our group – 2 other families from California – were already seated and so happy to see us! I melted into my chair for the 45-minute ride to the island of Aegina.

Aegina has a very charming small harbor lined with restaurants and stores. We walked around to the docks on the far side to meet our guide, Cristos, at his small boat. He took us across the water to a tiny beautiful cave and said “ok, swim into the cave.” 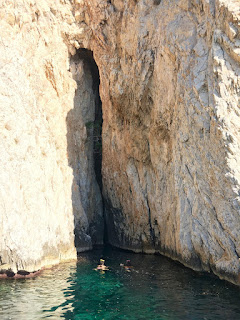 It was about 70 degrees and windy, and the water was COLD. There was zero chance I was jumping in. I knew Adam would agree. As we were talking about what a horrible idea that would be – SPLASH – all the other people on the boat jumped into the water. We watched happily from the boat as they all swam into the cave. They returned with a bucket of sea urchin (urchins?), which Cristos told us we were going to eat. For the second time in 10 minutes, I said “nope!” He cracked them open, scooped out their eggs with a spoon, and everyone on the boat, including Adam, ate them. 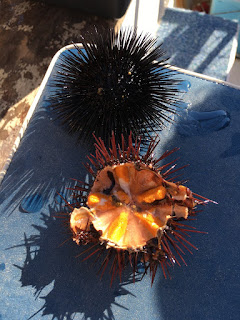 We visited another cave, where Cristos drove the boat inside for us to look around. It was very Pirates of the Caribbean, er, Greece. 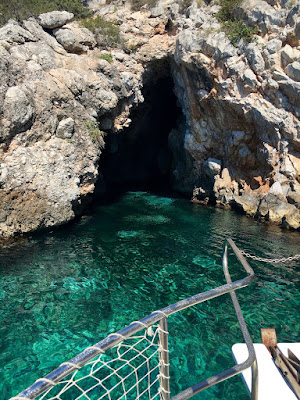 We took off across the water for another small island that looked deserted. As we pulled up to the tiny dock, about 2 dozen peacocks walked towards us. It was an animal sanctuary island! 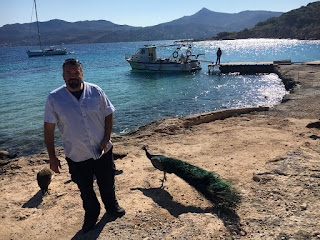 Adam, a peacock, and Cristos' tiny boat in the background

We fed peacocks from our hands and walked around a bit. It was astonishingly gorgeous! 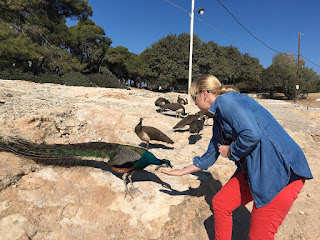 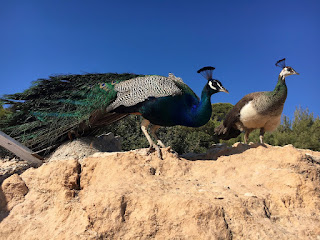 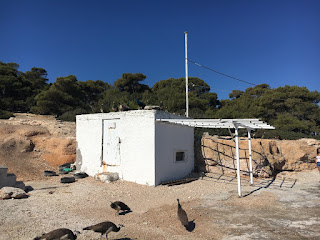 Back on the boat, Cristos told us it was time for lunch, so we sailed towards yet another island. As we approached, Adam said, “Oh wow, look at that little private island. That guy has the life! He has electricity strung across there, and what a setting!” We pulled up to the dock, and Cristos waved to a woman on the shore and yelled, “Hi Mom!” 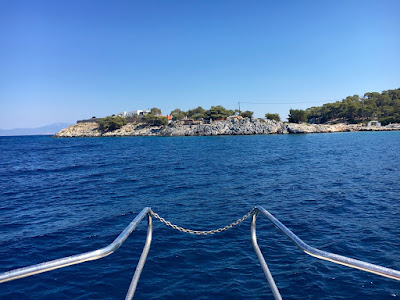 As we walked to the picnic area, Cristos told us that years ago, his father had asked to camp on the island and the owner let him. After a few years, the owner asked if he wanted to buy the land where he was camping. He did. Then over the next decade or so, he slowly bought up the other 6 plots of land on the island, until he owned the entire thing. Now Cristos and his family live there! WOW! 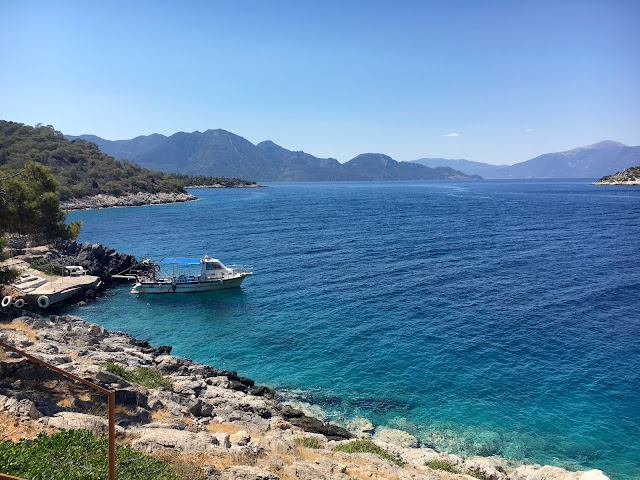 Cristos' boat at its home island 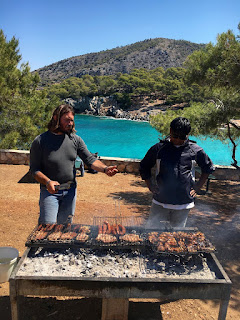 That is Cristos, on the left

Cristos grilled us fresh rooster, sausages, pork steaks and vegetables. We ate overlooking the most amazing little sparkling turquoise inlet. There was a goat, dogs, parakeets, ducks -- it was pure heaven.

I walked the entire island, taking in the views and admiring the unique plant life. 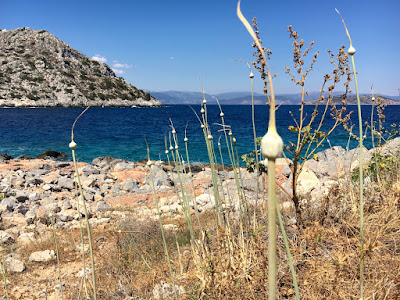 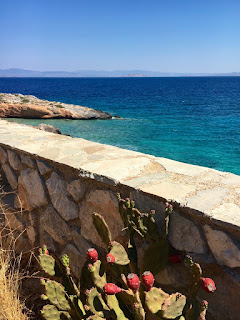 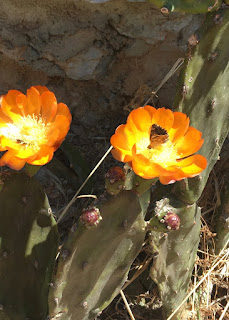 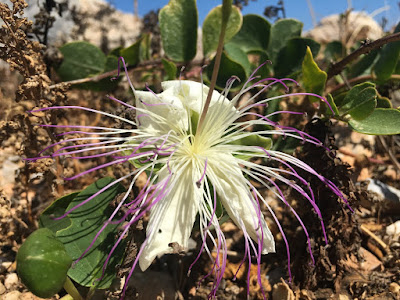 But we had to catch the Flying Dolphin Ferry from Aegina back to Athens to set sail on the cruise ship again, so we had to leave Cristos’ island paradise. 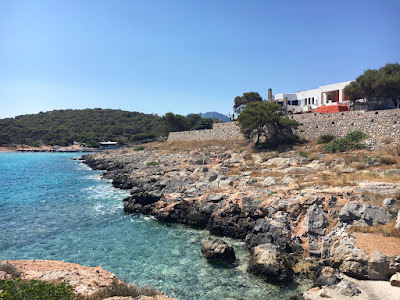 Back in Aegina, we decided to find a bakery and buy a small cake to celebrate the 25th birthday of a girl in our group, Kelly. She lagged behind, so we were able to surprise her when she walked up to the portico where we were all waiting for the ferry. Everyone waiting there joined in as we sang happy birthday.

We made it back to the Equinox without incident and watched the sail away from Athens on the lawn club. 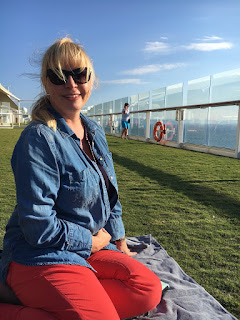 We ate spaghetti gelato (best thing on the ship! At the deck 5 gelato bar!) dinner at the buffet and retired early. 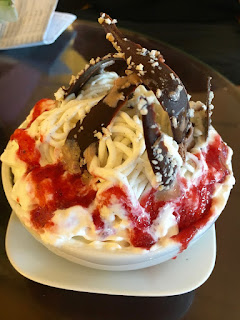 Xoxo
Posted by Leadfoot at 7:57 AM