We’ve been to France before – a weekend in Paris before our Mediterranean Cruise in 2012, and Marseilles as a stop on that same cruise.  I loved it so much, that I wanted to see more.  When I was there, I actually FELT French.  I have French heritage – my mother’s side of the family is French.  But I never knew how French I really was at heart until I spent that weekend in Paris.

It wasn’t just the fresh croissants. Madelyn and I talked to our tour guides and a lot of locals. We learned that the French have 5 weeks of paid vacation and 35-hour workweeks – which they consider a non-negotiable right.  (What other nation has a cabinet member called the "Minister of Free Time"?)  The French believe that the economy should support social good, and they have built an enviable social security program to help the elderly, sick and poor. Those views often makes me feel like an outcast in the US. But in France, I fit right in!  And as proof that they just might be right -- their poverty rate is half of that in the US.  Which also means that their violent crime rate is way, way lower than ours.

(Political side note: I have loved the French since France had the balls to point out to one its closest friends, the United States of America, that President Bush and his administration were acting like a group of thugs. France refused to help the USA steal Iraq's oil. That doesn't make them anti-American. A true BFF will tell you, to your face, when you're acting like an ass and screwing things up for the rest of the world. And that's what France did. I had wanted to visit ever since then.)

But politics aside, there is a lot more to love.  French women have helped to teach the women of the world how to be sexier at 45 than at 25 for hundreds of years. The French serve water without ice, as I prefer it. They make more than 400 kinds of cheese. And the bread – aaahhh the smell of fresh bread wafts down just about every street. Crispy on the outside, chewy on the inside, and easy to grab just about anywhere for an impromptu picnic. Enter Pinterest with tons of images that look just like the village in Beauty and the Beast…and…. we NEEDED more France.

So we are going back.

Our Tour de France starts June 19, and runs through July 4. We will post as often as we can during the trip. 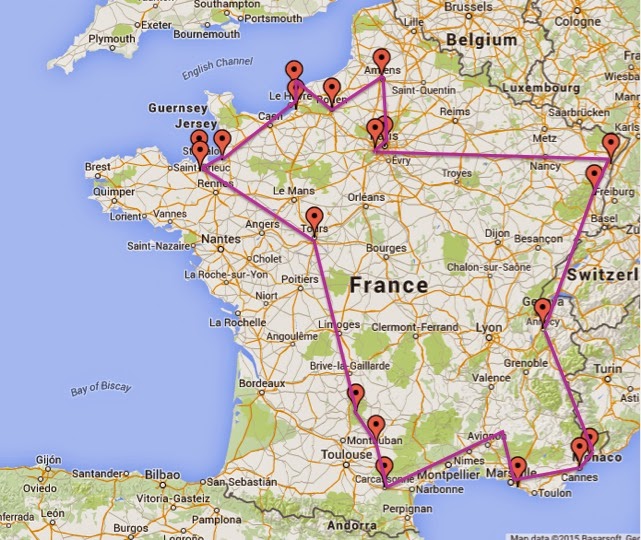 In the coming weeks, I will get a post up about how we plan a trip like this and share a good packing list for any type of trip.  M will tell everyone how she saves money and which souvenirs she is most looking forward to buying.

Until then, au revoir!