We woke up and felt awful. I am convinced that the Cuatro Palmas had been serving us grain alcohol. What we thought was rum was really just government-issued Everclear. And the worst part was that we couldn't hydrate. Adam rolled over and said, "Babe, I want you to open that safe, grab the wad of cash, and be the first in line at the store to buy water. We need provisions."

But I wasn’t about to venture out into Cuba nauseous and alone, so we dragged ourselves out of bed and down to the buffet. I use the term "buffet" loosely. It consisted of unrecognizable bowls of gooey substances. There was no real juice, only Tang-like liquids in various colors. Flies were everywhere, on everything. I had bread, butter, and a banana. 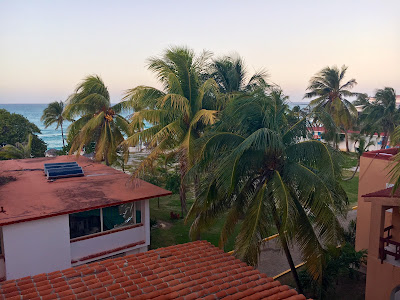 The view from our balcony

Adam went back to bed. I decided to go read by the pool and wait for the gift shop to open.  I watched some adorable curly-tailed lizards playing in the sun.  When the store opened, I bought provisions -- crackers & large bottles of water. All the bottled water (and soda, beer, rum…) in Cuba are made by the government. It made me laugh that the label said, "#1 in Cuba" since it truly was the ONLY bottled water in Cuba. It was like when I tell Madelyn she is my favorite daughter and she rolls her eyes at me. 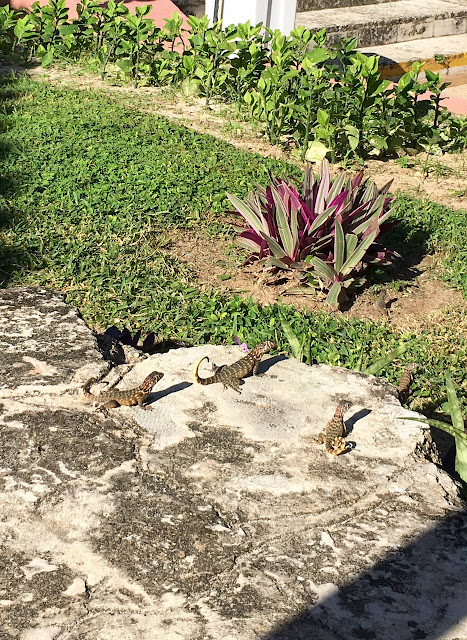 There are at least 5 lizards in this photo!

Once Adam woke up, we walked down street to first CubaCar office we saw to try to either get our car, or get our $800 back. Nobody was inside. So we kept walking until we saw another — nobody was inside.  Finally, at the third CubaCar office, which was several miles of dehydrated, hungover, 85-degree walking down the road, we found an office with people inside. The guy on the left told us to talk to the guy on the right. The guy on the right told us to talk to the guy on the left. Finally, they pawned us off on a young woman, who put us on the phone with someone else who said, "It's not possible." Adam looked at the woman and said, "Are you telling me there is not one rental car available in all of Cuba?" "Si," she answered, with a totally straight face. We asked them to give us a written statement that our reservation was not fulfilled so we could seek refund from the travel agent when we return. (Which I have spent the last 2 days trying to do. The travel agent, CubaToDo, said they would try, but CubaCar isn't answering them, and will likely say that we never showed up. So I decided to stop trying and just filed a fraud claim with Chase and Chase refunded my money.)

While all this was happening, I saw the hugest roach EVER on the office floor, so I pulled my feet up on the chair and sat all curled up in a ball, which isn't the best negotiating position.  Dejected, we started to walk back, wondering how we would get to Trinidad, 5 hours away, for our hotel reservation the next day. Adam looked at me and said, "Oh, Cuba," which promptly became our go-to phrase for the rest of the trip.  We came upon an office with a sign that read Cubatur, entered, waited, and talked to an agent that told us we were in luck — she could put us on a bus to Trinidad tomorrow for $30 each. She emphasized that we were lucky that it was Thursday, because that's the only day the bus goes to Trinidad. We asked if there would be room for luggage and she showed us a picture of a large luxury coach style tour bus and said there would be plenty of room and that the bus would pick us up at 6:45am. Whew. Well, that was resolved! So now we just have to figure out how to get to Havana once we are in Trinidad.

We took a cab that looked like a lemon on top of a scooter back to the hotel — they call it a Cocotaxi. Then we went back to the gift shop because we were starving and the lunch "buffet" wouldn't open until 1pm. We scarfed down some sour cream and chives Pringles and an orange Fanta. 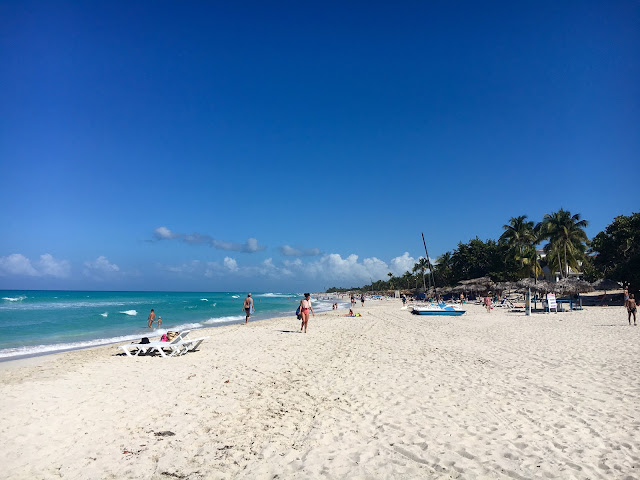 Then we hit the beach for an hour. It should be noted that we only went to Varadero in the first place because Adam had never been to the Caribbean. The beach was beautiful, with clear, warm water — but I have seen much prettier beaches. For anyone planning a trip — Cuba should be considered a history destination, not a beach destination. It was our least favorite part of the whole trip, so skip it. We swam a bit, but the waves were huge! As we were drying off, we heard Hotel California playing over the speakers and thought of the kid from last night. Ha!

We went to the buffet, hopeful that something would be edible. Adam found some uncleaned shrimp to pick at, but since I don't eat seafood, I literally ate bread with butter, potatoes, white rice & black olives. I tried to eat meatballs, but when I cut them open, they were full of gelatinous pink stuff that was most definitely not meat. I asked for ice tea. They said they don't have it, but they have "tea with ice." Um, ok. They brought me cold water with a tea bag in it, which totally did not work. 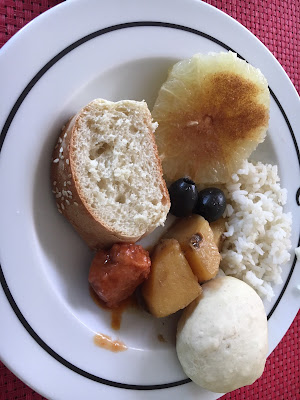 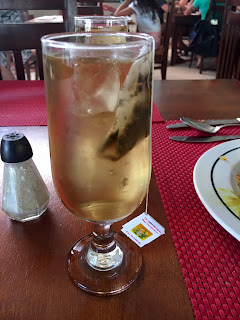 I made Adam promise we could leave the property for dinner. He wholeheartedly agreed. We went back to the hotel room, took showers and napped. Adam fixed the toilet (yay!) and told me I had to stop forgetting and flushing paper. In Cuba there is some kind of law that you cannot ever ever ever flush toilet paper under any circumstances. You must, after any and all types of potty usage, put the paper in the trash bin next to the toilet. There are signs everywhere to remind you of this, but remembering is hard.

Trying to drown out that nonsense, I turned on the TV, expecting to find only old Cuban movies and newsreel propaganda from Fidel. Instead, CNN popped on! We saw the Bill Cosby-got-arrested news and felt back in the loop momentarily.

Hungry again, we walked to 5 different restaurants until we found one that looked good and could also fit us in. Jackpot! The Barbacoa Steakhouse came through with real food that was actually good! It was then and there that we learned the lesson — in Cuba, ALWAYS eat at a paladar (a privately owned restaurant) and never, ever, ever eat the government food/hotel food. 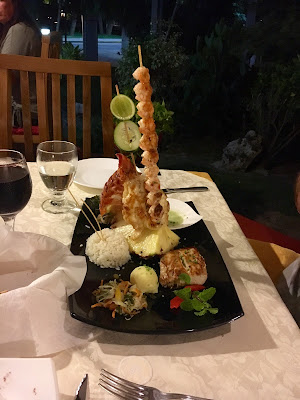 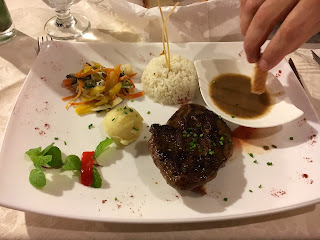 Feeling a bit refreshed, we hailed a vintage pink convertible Chevy cab and took it up and down main drag for $10. Hotel California came on the radio and we just looked at each other and just started laughing. 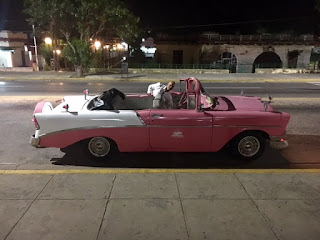 Our cab (and where Adam last saw his favorite hat)

Check out all the cars on the street as we pass them. Amazing!

The entire main street in Varadero is loaded with souvenir stands, so we did some shopping. Cuba has the most bizarre, sexually obscene souvenirs! We laughed at the ashtrays that depicted cigars with faces in various sex positions. I bought a hand-made mystery box for $5, thinking Madelyn would have fun trying to figure out how to get it open. 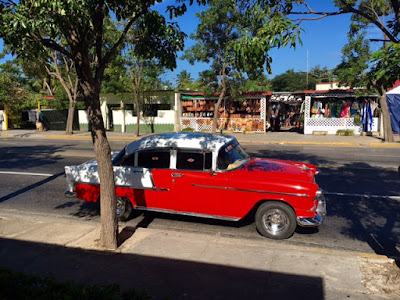 Across the street from our hotel, we went to the Beatles Bar (yes, those Beatles) and heard Hotel California AGAIN. We decided it must be the official song of Cuba, which is apropos since they aren't allowed to leave. I had a pina colada, (which had no ice, just coconut milk, rum & nutmeg) and Adam had a mojito – which cost $7 for both. We traded. We laughed that we had just paid for dinner & drinks to avoid the slop & poison at our all-inclusive hotel. Oh, Cuba.

We walked back and went to bed to the sweet sounds of CNN. We commented that if there were a NYE terrorist attack, we wouldn't even hear about it for 5 days. I was ok with that.

Tomorrow… The long haul to Trinidad in what was NOT AT ALL a bus.