To review, when we booked our bus to Trinidad yesterday, the lady told us it would be a "large coach with AC & room for luggage." We got up early and headed downstairs, all excited to see our big comfy bus. A van taxicab, which already had 11 people inside, rolled up. We thought, "surely that can't be for us." The driver told us it was the "Trinidad Tour" and to "climb into the back row and take our luggage with us, because there was no cargo space." Ugh. We squished our suitcases up against the window, and I contorted my body to fit between them and Adam. We figured it would be uncomfortable, but manageable…. Then we stopped at another hotel. 2 more people climbed aboard. "Scoot over!," said the driver. We were stacked like sardines! Oh well, at least there would be AC for the five hour drive, right? Not so much. The rattling AC unit, right above our heads, barely worked and dripped on poor Adam for the entire trip. 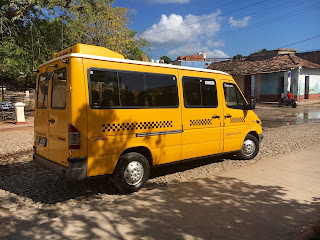 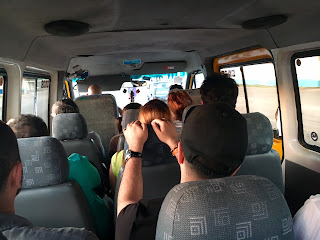 As it turns out, this "bus to Trinidad" was actually a tour, so we would get to stop at the Che museum in Santa Clara on our way and the front-seat passenger, named Tony, would narrate along the 5 hour drive in both English and Spanish. Yay. We were the only Americans on the "bus," but Tony assumed we were Canadian, so we rolled with it. About an hour down the road, we stopped at a rest area (a shack that had fresh guava juice and ham sandwiches for sale). Adam had a sandwich and pineapple juice. I had fresh guava juice and Pringles. Tony told us all to use the bathroom because it would be 2 hours until the next stop. A lady was sitting outside the bathroom selling squares of toilet paper. I bought mine, went pee, put my paper in the basket, and then tried to figure out how to flush the toilet because there was no handle. The lady walked in, with a bucket of water and threw it violently down the toilet to get it to flush. This is a job in Cuba. Seriously. Every place we went in rural Cuba (and even some places in Havana) had a toilet lady that has to flush for you with a bucket of water. I can't even…

Back in the van, Tony told us it is mandatory for every young Cuban male to serve 2 years military. He said that policy was put in place "after the US tried to invade Cuba and Cuba had to make a strong military to defend themselves." Adam said, "aww, that's cute." I said, "wait…the US technically never invaded Cuba." Adam told me not to fight with Tony, because this van was better than being stranded in the middle of Cuba. 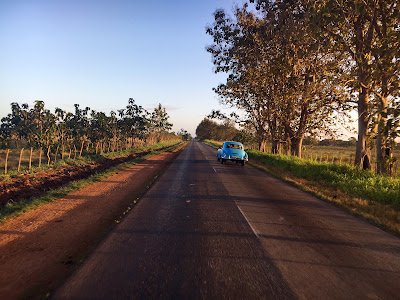 Along the way, I could really only see out a sliver of window, and the back window if I twisted around. We saw a lady standing on her roof pulling in her laundry line, tons of horses/carts on the road, a guy milking a cow, a couple riding a scooter while the lady held a baby, and for some reason, scarecrows with corncob penises sticking out of their jeans. A lot of them too! Oh, Cuba. We also saw a full pig roasting over a fire and a huge side of raw meat hanging in somebody's front window. About that time, my stomach started rumbling. 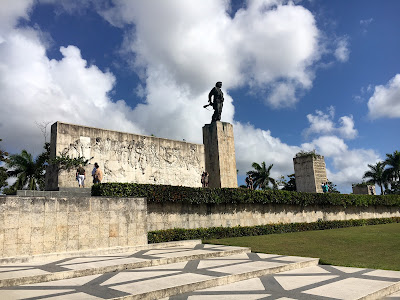 By the time we got to the Che museum and memorial, my insides were doing cartwheels. Tony yelled at the group to stay together, so we walked through the small museum, and then into the crypt where Che's body is kept. Handsome tombstone or not, I couldn't wait a minute longer. I ran out to the bathroom, leaving my purse behind with Adam. The toilet lady would not let me in without money for toilet paper. So I had to run all the way back, get money, then run back to the bathroom. This is going to be TMI, but I barely made it in time for all of the government slop, grain alcohol and Pringles to come roaring out of my body. The toilet lady had only given me one square of paper. But fortunately, I had grabbed my purse this time, and had tissues inside. I used them all, and threw them all in the can, not the potty. I felt better. I turned around to flush, and realized there was no flushing. That toilet lady was going to have to come in and see what I had done.

I got back on the van, head hung in Cuban shame. I snacked on our provisions and silently sat in my one foot square space, watching sugar cane and tobacco fields go by. At one point Adam looked at me and said, "awww Babe, you have a sweat mustache." I wasn't amused. 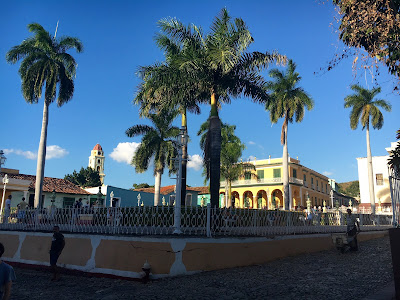 About 2 hours later, we finally arrived in Trinidad. This is the Cuba I was looking for! It had charming colonial buildings and cobblestone streets. We had lunch with the group in a restaurant that was an once old prison, while musicians played for us. An adorable boy tapped me on the arm and held out his hand. I gave him an American dollar and he held it up and inspected it carefully, then walked away with such pride on his face. Adam said, "Babe, word is going to spread like wildfire that there's a big blonde lady handing out money and we are going to be mobbed. You have to stop. And don't start crying if you see a one eyed cat or something either!" I gave him my "whatever, shut up" look. 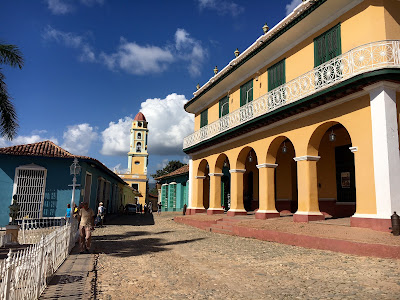 We decided to join Tony's walking tour, which included a stop in a cigar factory. We saw cigars being made and bought some.  Then we stopped in a bar to sit and cool down. Tony joined us. At that point, we told him we are Americans. He said we "must go back to the US and tell everyone we know to vote for Hillary!" He said, "if any of those Florida Republicans win, Cuba will suffer further." He was very adamant. If only I had that much power, Tony. 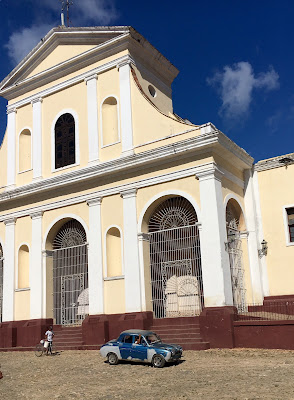 At this point, we grabbed our luggage off the van, and said goodbye to Tony and the group. It should be noted that this tour group now had to drive BACK to Varadero, 5 hours away. I was so happy to be staying in Trinidad!  We went to to the Trinidad Cubatur office, and asked if they could get us to Havana tomorrow. They told us to go to the bus station. I sat while Adam went to the bus station. A huge guy walked outside, where about 30 people were waiting in line, and said, "We are closing. Come back in the morning," and closed the door.  So we were ride-less. Again. 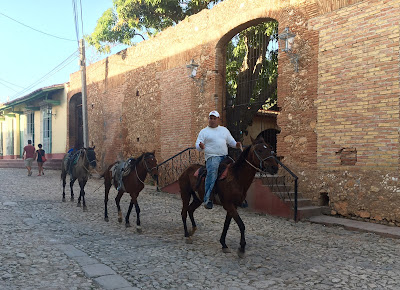 With our luck, this will be our ride to Havana

We found the house in which we had reserved a room, Casa Colonial 1830. In Cuba, you can stay with families in casa particulares, which are like B&Bs. We got to pick our room, then asked for help with a ride to Havana. Gustavo, our host, said he would make some calls. 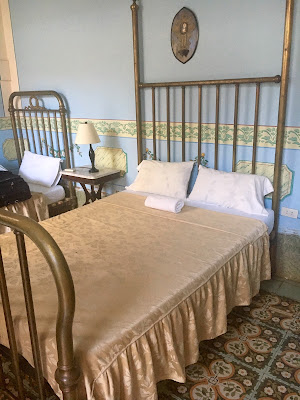 Our room in Casa Colonial 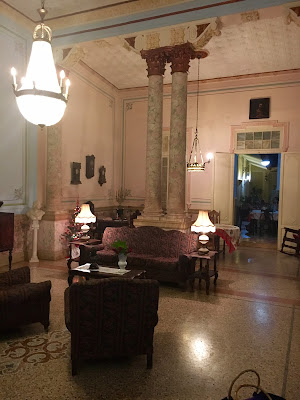 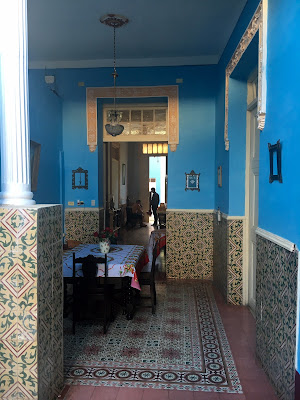 We walked to the main square in town to have a drink & listen to live music. An adorable little dog adopted me by flopping down right onto my feet. 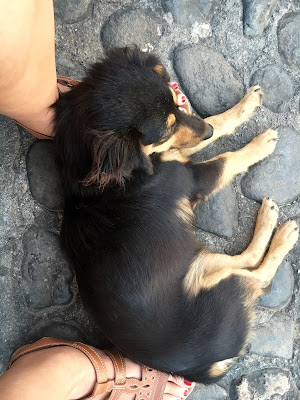 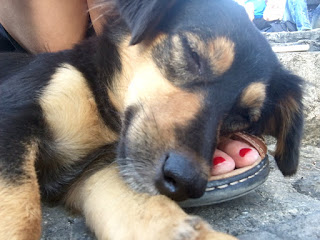 We walked back to the casa, and saw this sign on the wall, which may have literally brought tears of joy to my eyes: 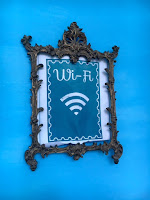 We bought one hour of Wifi for $8 ($4 each). Gustavo walked out told us he found us a shared ride to Havana for $40 each. Sold! We asked if it was a modern car with AC and he promised that it was. We had heard THAT before!

Since it was New Year's Eve, we got cleaned up into nice outfits, then walked to eat dinner. Earlier in the day we had laughed about the sticker on the back window of this "Bad Ass Show Car:" 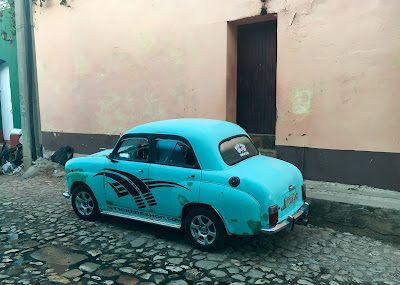 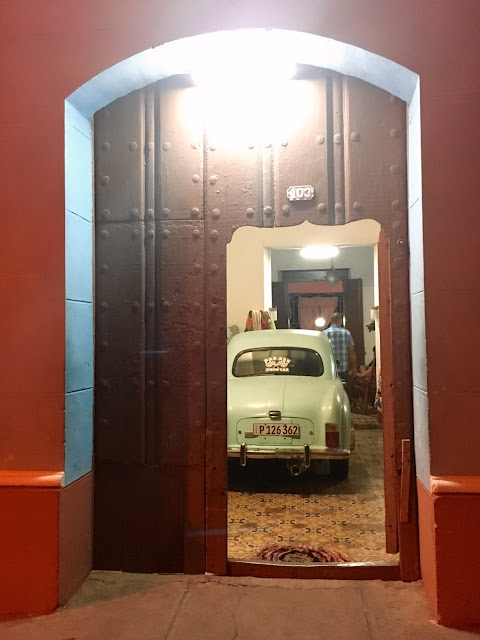 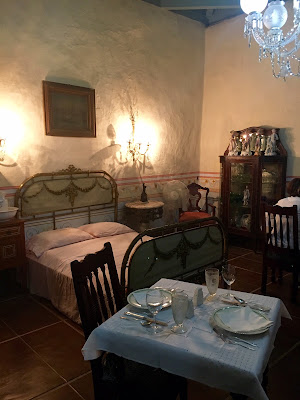 We ate in a historic paladar on the main square. For some reason, everything in Cuba is whatever it is, and ALSO a museum, so we ate next to a bed. We had stuffed bananas, salad and honey chicken. It was good! Things were looking up!  (Still no iced tea, though.)  The owner brought us an apple and said it was "on the house, for dessert." 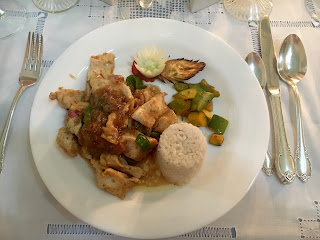 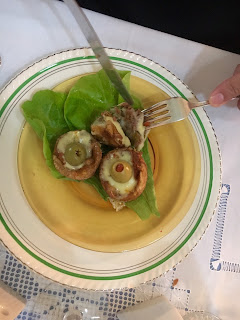 We walked back to the main square and found a large crowd gathered and live music playing. On the way, we saw a leg bone, which we think was from a goat, with the hoof still attached, just laying in the street. Oh, Cuba. Some ladies on the square had turned their house into a bar and were selling drinks out of their front window, so we had a few, and settled in to ring in the new year. The same adorable dog from earlier found us again to wish us "Feliz Ano Nuevo!" 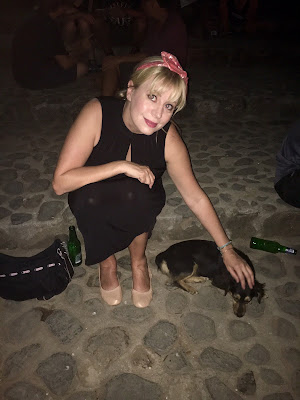 When it was midnight, there was no countdown at all. Everyone just started cheering and kissing. 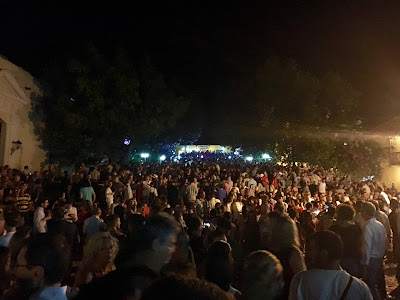 We walked back to the casa and went to bed to a super loud party next door. We also found out that our bed had no top sheet or blanket — only the thin bedspread. Gross. But we were tired, so I hit the sack hoping that I wouldn't have nightmares about becoming a toilet lady.

Tomorrow: The road to Havana